We Were Blessed - Clongowes Wood College 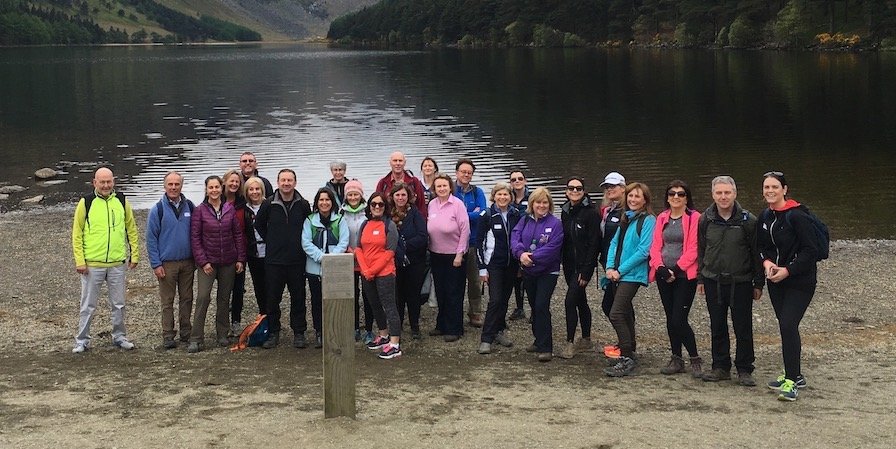 ‘We were blessed in every way, a beautiful location, in the company of great people and best of all, super weather!’ So wrote Liz O’Kane after a day spent in and around Glendalough on the 2017 Parent Retreat…

At 10.00 last Friday (29th April) 23 parents, including the Headmaster Mr Lumb, arrived with springs in their steps for the Clongowes Parent Retreat at the Glendalough Hotel. There was anticipation and excitement among the group, some parents being stalwart Clongowes retreat goers, some coming to the end of their Clongowes journey hoping for divine Leaving Cert inspiration for their sons and others who were first timers. All of us were there for our own personal reasons and everyone was there because they wanted to be.

Pastoral Co-ordinator, Anne Marie Dolan opened the retreat with some reflection and meditation, which was definitely needed to calm down the excitement and chat! She asked us to think inwardly about why we had decided to undertake this retreat, what our hopes and expectations for the day might be and the various things and people we wanted to pray for. We sat in reflective silence for a short while before lighting a candle each for our intentions and briefly stating what we all hoped for the day and for the others around us. It was very clear from those who had attended before that these retreats had been of great benefit spiritually and emotionally as well as in getting to know other Clongowes parents we would not necessarily meet in the school environs.

Shortly after 11.30 we were led off by Declan O’Keeffe, who had planned our walk, the first 45 minutes of which was to be completed in silence. This was a good decision as some of this section was a steep upward incline! Oddly this did not prove to be as much of a challenge as most had thought. I am of course referring to keeping silent! Onwards we rambled keeping a steady pace of choice, chatting with whom ever we either caught up with or slowed down with on the way. All of us with a tale to tell, a concern for a child, a parent, the Leaving Certificate or simply wanting to be part of a quiet, contemplative day in the company of like minded people.

After a couple of hours we stopped for a packed lunch in the pretty village of Laragh before striding onwards to our high point overlooking of the Glendalough valley with magnificent scenery and views of the two lakes side by side. (The lesson for the day for me – Gleann dá Loch, ‘Valley of the Two Lakes’, which I hadn’t known before…). We then meandered downward and arrived back to the hotel having accomplished 12km (or thereabouts) of a hike. Great satisfaction for everyone and not a drop of rain! Following a swift coffee, Anne-Marie brought us back to our prayer room for a de-brief and further reflection. Some brought mementos of the walk: wild garlic, a jagged stone, Spanish bluebells, dandelions and heather. Personal symbols of a day well spent.

Fr Sheil arrived to say a swift and reflective mass in the tiny visitor’s chapel, God’s Cottage. Anne-Marie held the chorus together with her guitar and sweet voice, playing some of our school’s favourite hymns. After that we were all ready to eat and continue our chats and the day finished on a satisfying note as we all broke bread together. Thanks to Anne-Marie, Declan and Fr Sheil this was / is a special, important and worthy day for all and one to be putting in the diary for 2018.