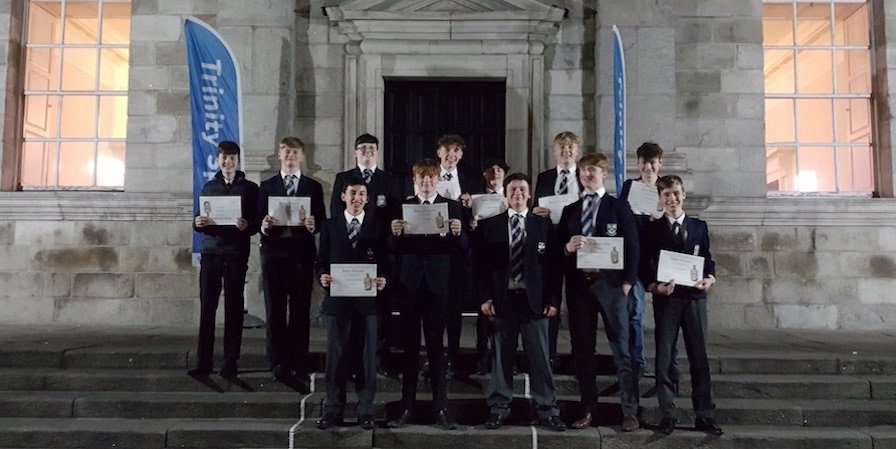 On Tuesday 4th April our Latin class accompanied by Mr Adam Conry headed for Trinity College Dublin to compete in this year’s Latin Poetry Competition. This annual event brings together Junior and Senior Cycle students of Latin, Greek and Classics to read poetry in the vernacular of Ancient Rome. The contestants are judged on their pronunciation, delivery and mastery of a prepared extract of Latin or Greek poetry. As Clongowes have done well in this competition in the past, our class had much to live up to!

Latin scholars from several schools took it in turns to recite their poems and – as we took our seats – the lively hexameter of Virgil and Ovid’s elegiac couplets started to fill the air. One by one the Clongowes students took to the podium to recite our favourite Latin poems. Phaedrus’ morality poems and Catullus’ Lament for his Lost Brother were popular with the class, but it was Caden Tynan’s dazzling rendition of Dido’s Curse of Aeneas (Aeneid Book IV lines 381-392) which brought home the first prize. Caden’s delivery was pitch-perfect as he breathed a flood of emotion back into the two thousand year old verse. Second place in our category was also awarded to one of our number, Adam Wozniak, for his flawlessly executed performance of Dido Neglects her Duties (Aeneid Book IV lines 74-88).

Everyone poem was well recited, and we each received a Bene Dictum certificate. But the night was not over yet as we retired to ye olde McDonalds of Maynooth, where – in true Roman style – we feasted with our bare hands. The night’s events were discussed, jokes were told and the victors congratulated! The delightful evening would not have been possible without the help of Mr Conry, who trained each student who took part, giving up his free time to do so. Hopefully even more students will participate in next year’s competition, having seen how enjoyable this experience was. It was truly a night to remember.