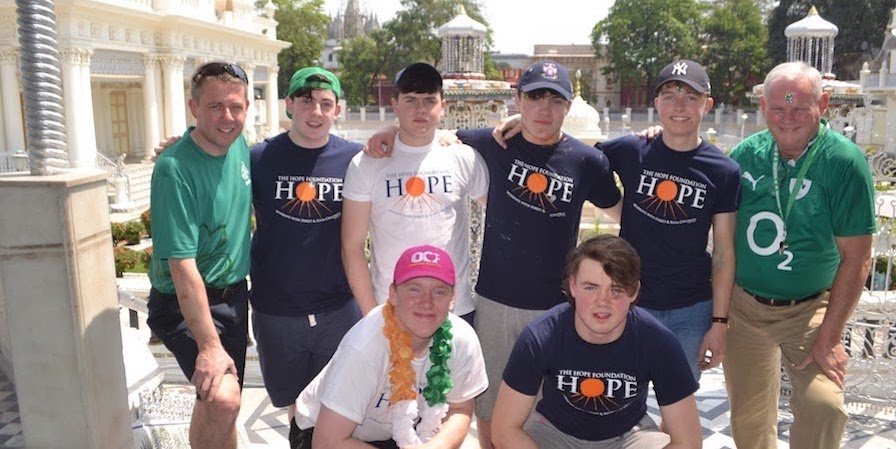 Last month six Transition Year students, Harry Arkwright, Brian Gallagher, Tom Gilheany, Ross MacGoey, John Maher and Conor Martin along with Mr Noel Murray and Old Clongownian, Pyers O’Connor Nash (OC’69) set off for Kolkata ‘The City of Joy’ as part of the HOPE Foundation trip. As is evident from the itinerary the purpose of the trip was to visit and engage with students who are in HOPE centres in Kolkata (schools, hospital or crèches) – children HOPE has rescued from the streets. Conor Martin reflects on the experience…

Five of my classmates and I were fortunate enough travel to Kolkata from the 15th to the 22nd of March after first raising sufficient money to fund the trip. We arrived on Thursday the 16th tired and jetlagged and by the time that we got to the hotel we had already witnessed the poverty, noise and colour which we would be surrounded by for the rest of the week – the constant beeping of horns, people shouting in Indian – and Harry Arkwrights distinctive singing voice…

By the end of the day, we had also experienced the cheap exchange rates at the market where we bought our pajama punjabis, which highlighted how very cheap everything was. During the bus ride back to the hotel from the market a youngster (accompanied by his mother, holding an even younger child) tapped on the window begging us to buy balloons. It was a real culture shock to realise that – for a young mother and her two kids – begging drivers to buy balloons was their only source of income and that there wasn’t anything else they could do. It also struck us that there are thousands of people, who are in similar situations and that there wasn’t much that we could do to help. Thinking about it makes me appreciate how lucky and different my life is compared to theirs – because you don’t choose who you are.

I also realised how grateful I am for other things like fresh water. At home we presume that clean water will come out of the tap when we brush our teeth, but in Kolkata, I had to remind myself to use bottled water, otherwise I would get badly sick for several days. Most of the population in Kolkota may not be able to afford clean water to drink, let alone brush their teeth. A large proportion of them must use the river to wash their teeth and fill their bottles – and they do that to survive even though they know it is dirty diseased water. It is a simple thing but it emphasises the social injustice in the world and how grateful we should be but sometimes are not.

To diminish the pain

During the week, we visited several different homes for girls and boys up to the ages of 15 or 16 as well as a Rehab Centre and a special needs school. The Rehab Centre was only boys, ranging in age from 6 or 7 to 12 or 13, who had turned to solvents to diminish the pain of hunger on the streets, and all of whom had scars on their arms. Most of them were very chatty when they met us and they seemed no different to anyone else we met; they were energetic and enjoyed being with us and doing chin ups on the bars, but one of them was silent and withdrawn, the complete opposite to the others. It reminded me that these guys had suffered a lot and it was unnerving to imagine what sort of things they had experienced and what sort of challenges they had endured that had driven them all to use drugs at such a young age.

However, the general atmosphere of all the homes including the Rehab Centre we visited was incredible; they were all so happy when they saw us and were eager to impress people they had never met before. They sang and danced for us, which was always very entertaining and overshadowed our meek performances of ‘Firework’ and ‘Twist and Shout’. Their English was very good and when we visited boys’ homes, we were challenged to a dance off and arm wrestles including competitions to see who could make the coolest handshakes. Every time we went to a new home, the time flew by really quickly and it was inspiring that – even though some of these kids had lost their whole families or have experienced things we may never experience in life – they are still so hopeful and haven’t given up even though they are in the middle of one of the most difficult places to live in the world. It was like this throughout the week – meeting kids who were over the moon and ecstatic to receive a small bottle of bubbles or some stickers or to have a balloon blown up for them.

Overall, I have to say that this was an incredible experience, that I really enjoyed it and would definitely go back. All the people there were amazing (and some of the nicest people I have ever met) but it was also a culture shock to see how different some people’s lives are compared to ours. We would like to thank Mr Noel Murray and Mr Pyers O’Connor Nash for making this possible and to our successors in Transition Year 2018 we would say: ‘go thou and do likewise’.

The Hope Foundation is dedicated to promoting the protection of street and slum children in Kolkata and the most underprivileged in India. HOPE works to effect immediate and lasting change in their lives. By extending support to children and their communities via 60 on the ground projects, HOPE provides sustainable holistic solutions to protection and development. By providing healthcare, counselling and education, HOPE ensures children in its care enter adulthood equipped with the tools and support they need to live healthy and happy lives. To date HOPE has helped over 2.3 million people. For more on this remarkable organisation visit http://www.hopefoundation.ie