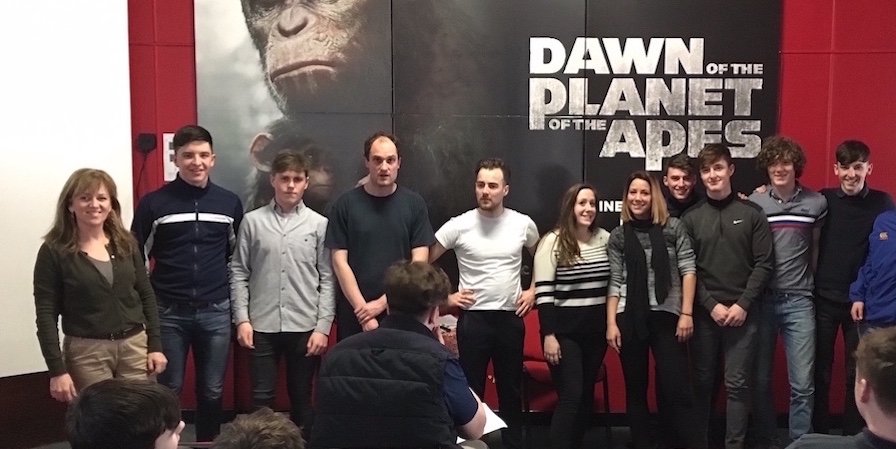 Tuesday the 21st of March provided an unique day for us. To witness the pure comedy provided by the brilliant French Theatre For Schools was an experience I’ll certainly not forget. It gave the chance for all Poetry French students to take a ‘deserved’ break from the books and to sit back and enjoy the comical show put on for us. Aside from the amusing aspect of the production, it acted as a valuable academic asset to us all.

Preparation began for us all weeks earlier. Volunteers needed to get ready for what was sure to be an interesting experience to say the least. After Ms Dooley provided the details, Tadhg Maloney, Adam Mullan, Rory Delap and I decided to give it a go. Without any notion of what was ahead of us, the seven volunteers (from other classes also) decided to dive right in. Practices were held in class with Matthew Martin and Bobby Sheehan taking the production’s place. With some shaky pronunciation from all and dauntless action by Tadhg we were ready for what we were sure would be a particularly different afternoon

After break ‘the show was on the road’ and everything was in place. In all honesty sitting there beside ‘mes amis’ I hadn’t a notion of what was ahead of us. It kicked off just after 1:30 and the time went so fast from start to finish. The overall setting of the production was at an audition for a film and with rich french this was portrayed by actors Amélie, Barbara, Gilles and Romain. Tadhg got the volunteers going by showing us his angry face which had the crowd nearly crying. Myself and Adam Mullan were used as puppets and still to this moment it all seems a blur.

The highlight of the evening was when Tommy Inglis and Brandon Keily hesitantly waltz around the room a performance so good it should have been on Strictly Come Dancing. Fairplay to the lads for a gutsy act that had everyone on the floor laughing. Overall the production was fantastic in so many ways and caused an uproar of laughter uncountable times. The different dynamics of French provided a different perspective in how to learn and enjoy the language.

A special thanks must go to the French Theatre For Schools for coming in and giving the average Tuesday an unfamiliar light. We must also remeber the work of the whole French department (Ms Dooley, Mr Gibbons and Mr Marron) for organising this and for all their tireless work throughout the year.