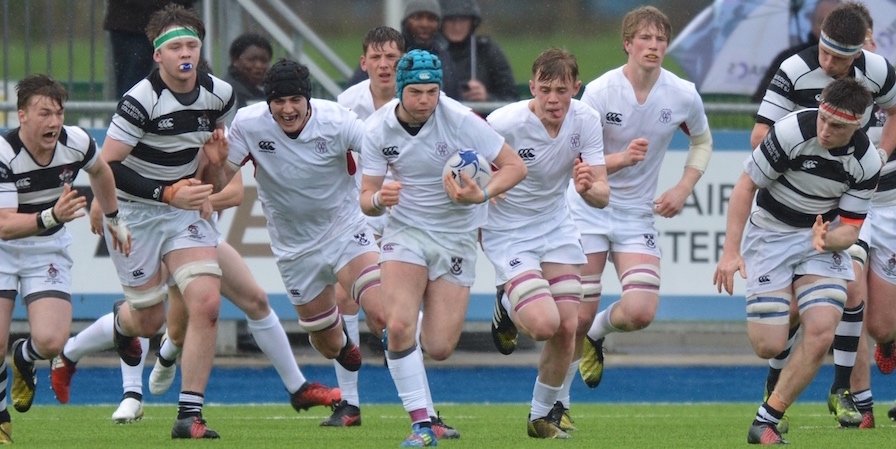 In the end the gap of five points between the teams that had pertained for much of the game proved a bridge too far and the Clongowes senior team was obliged to give best to their confreres from Belvedere College at Donnybrook in the Leinster Schools’ Cup semi final today. The teams scored a try apiece either side of the interval and it was only a conversion and a penalty that separated them at the death after one last attack from Clongowes from a penalty award proved insufficient.

In a hard fought game where little quarter had been asked or given the elements dictated matters as much as the rugby skills on display. A strong wind that had favoured the north Dublin school for a sodden first half died at the interval and was of no assistance to the Clongowes boys as they attacked the Wesley end of the ground after the break. They had done well to contain Belvedere to ten points (converted try and penalty) in that period, especially after the loss of Clongowes flanker Anthony Ryan to a shoulder injury (although his substitute Tom Coghlan was a more than able deputy).

They did even better to cross for a try in the 28th minute when centre Ben O’Shea took a delicious and unstoppable line following a deft pass from scrum half Joe Murphy in a move that had originated at the tail of a Clongowes lineout following good work by captain and number eight (and primus inter pares) Seán McCrohan and flanker David Jeffares. It was a thing of beauty in a game that afforded little scope for such moments.

The second half saw Belvedere come again and again as wave after wave of attackers were repulsed just short of the whitewash before another try was forced, conceded and converted to leave Clongowes twelve points adrift with a job of work to do. However, as the game continued to ebb and flow they found it difficult to establish a foothold in the opposition half for any length of time. But keep at it they did (no less than we would expect) and Joe Murphy obliged by sneaking over to dot down with four minutes left on the clock. A hasty conversion from O’Shea restored the five-point margin and led to a nervy endgame.

When Clongowes were awarded a penalty on halfway as the clock turned red we dared to dream. A try was needed to tie matters up and the ball was moved quickly to left wing John Maher (something of a totem this year and last) but he was heavily marked and the move died along with any hopes of cup glory for this year.

But all hope should not be lost as many of these young men will be back in action next year (and some the year after) and will have learned much from their experiences throughout the season. Kudos must go to the coaches and to the enormous collective effort by the nineteen starting players and subs who gave their all on the Donnybrook turf yesterday and never – ever – said die.