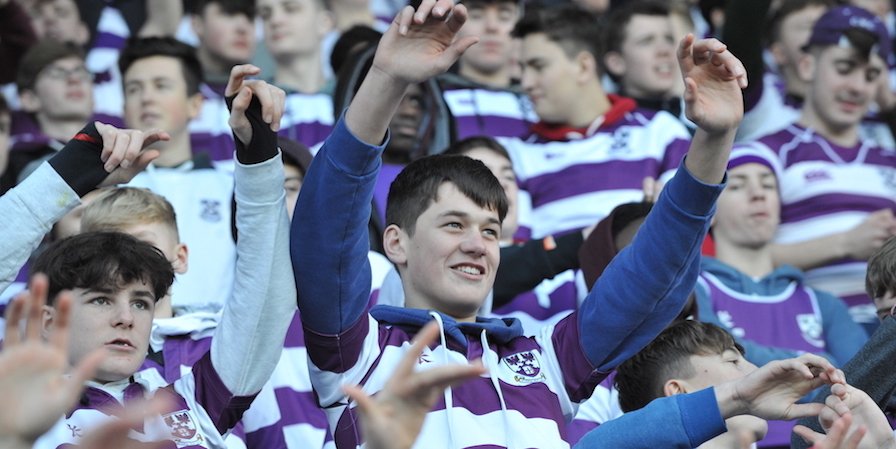 It’s that time of year again, when the young men of Clongowes don the purple and white to represent the college on the rugby field. While this has been happening since the boys returned to school last August, there is nothing to quicken the pulse quite so much as the sight of 15 young men striding out on to the pitch ready to give their all in the Leinster Senior and Junior Cups.

The seniors were first into the arena on the last day of January, when they took on cup debutants, St Fintan’s High School, in Donnybrook. The men from Clongowes flirted with both triumph and disaster before finally settling for the former in the 69th minute with a display of the stubbornness and teamwork that is their hallmark. (Report here). They followed this up a fortnight later with a ten-point win over a valiant St Mary’s side, which bounced back from 21-0 in the second half to 21-14. However, the boys in purple and white re-focused to deny their opponents any further scores and make their way into the semi-final for the fourth year in a row. (Report here).

The Clongowes junior team followed their senior brethren into the quarter-finals of their cup with an impressive victory at Donnybrook on February 5th over the ill-starred, Cistercian College Roscrea. Rather remarkably all 40 points came in the first half with two tries from Christopher Grimes and one apiece from George Fitzpatrick, Michael Behan, Barry Dooley and Calum Dowling, five of them converted by David Wilkinson. (Report here).

It is 91 years since Clongowes first won the Leinster Schools Senior Cup. It took us 52 years to repeat the feat and we have won six more in the intervening 39 years. Meanwhile the Juniors have won five trophies since the last days of the Second World War, the latest in 2008. Indeed it is not unusual for a generation to pass through Clongowes without tasting cup success and it is now six long years since either trophy last graced the cabinet at the end of the Ref’ corridor. Each one of these successes is precious and each is to be prized in this, our 95th year of cup rugby. The current crop of players are proud successors to every cup squad that Clongowes has sent forth over the years, and they cherish the hopes of being one of the favoured few to return next month with the sweetest of cups.

The latest instalment of both of these historic competitions is almost upon us with the junior boys back in action next Monday and the seniors playing seven days later (both matches against Belvedere College – details below). The ‘23rd man’ (this means you!) has always been an integral part of the cup campaign and so we encourage you to come along and support the boys as they keep the purple machine rolling along the roads to the RDS and Donnybrook in March.