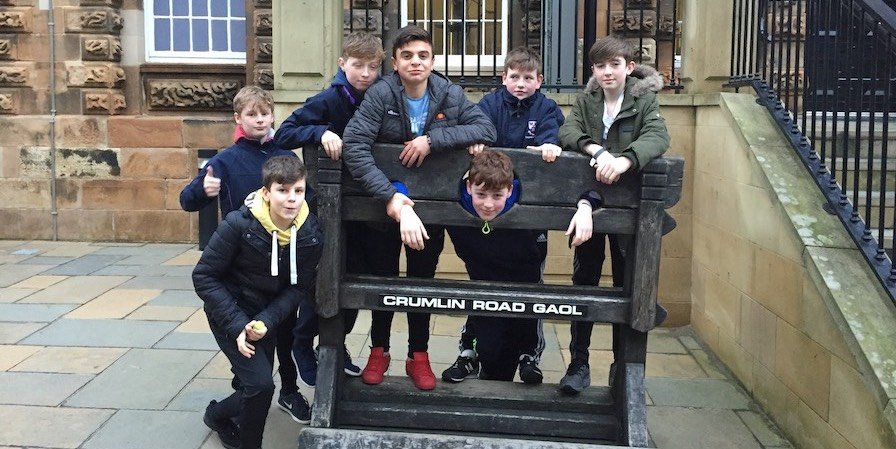 From the moment they awoke on the morning of January 23rd the First Years were all but uncontainable with excitement at the prospect of the annual trip to Belfast. Cub reporter Fiachra Lamb takes up the story…

The excitement was high on Monday 23rd January when our merry band of boys, set off for Belfast, where we were immediately pitted against Campbell College. The three teams played well, with the As and Bs winning (59-5 and 43-15 respectively, Ed) whilst the Cs narrowly lost (32-28) in a most exciting match. After checking into the La Mon hotel we went for dinner and then onto our evening’s activities: ice skating (slipping) and ten pin bowling. A great start to the tour!On Tuesday we visited the Titanic Exhibition which was very interesting and enjoyable. Afterwards we went to Pizza Hut (where we had all you can eat pizza!) and then to a gaming arcade, which was great fun. That afternoon we had a tour of the Crumlin Road Gaol, our guide had lots of information for us and it was really fascinating. After dinner we went to We Are Vertigo, Europes biggest trampoline park after which we had a swim in the hotel pool before bed.

Every morning we had a fry for breakfast, which was a great start to the day – the potato and soda breads were delicious! On Wednesday morning we visited W5, an interactive science museum. It was really cool and we could have stayed for there for hours, but we had to grab a bite of lunch in Victoria Square shopping centre before we played our second matches of the tour. This time around,  against R.B.A.I, we weren’t so lucky. We were beaten in every match but had great fun playing all the same; perhaps this action packed tour was beginning to catch up with us… That evening after dinner we went to Trigger Happy. Lots of lads kept on shooting each other and it was sweaty stuff but it was painfully funny and awesome. We didn’t arrive back at the hotel until 11:45 p.m, best day ever!

The next morning was our last day in Belfast so we packed up and had a room inspection before we checked out. We spent a couple of hours in Victoria Square, where – at the top of the five floors of shops – there was a great view of Belfast. We arrived back in Clongowes later that afternoon. It was the best trip of my life. If it wasn’t for Mr Tony Egan, Mr William O’Sullivan, Mr Killian O Domhnaill, Fr Michael Sheil, Nurse Mary Cross, Mr Frank Kelly, our two Gap Students Joe and Andy and especially Mr Daryls Maxwell, this trip wouldn’t have happened so a big thanks to all of them.