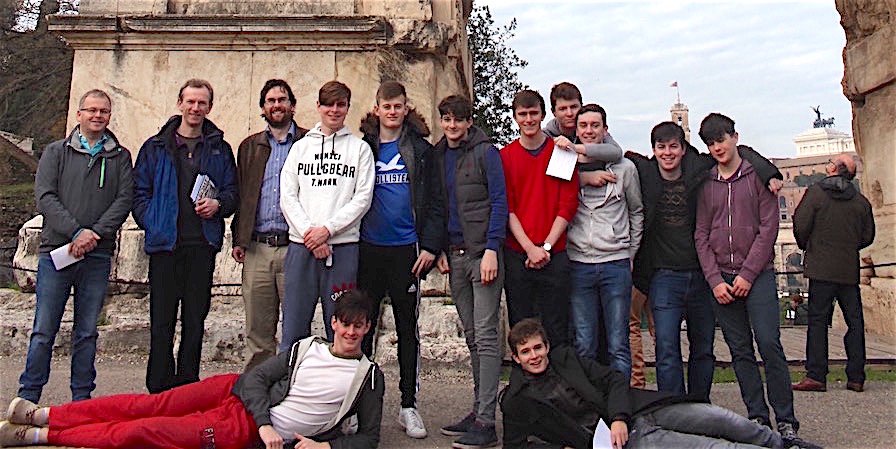 The Rhetoric Latin class, ten men strong, set off from Dublin Airport at 6 a.m. on Saturday 3rd December accompanied by their guide Dominus Conry and fellow Romanophiles Domini O’Hara et Carroll. Having used the flight time to catch up on some much needed sleep, we taxied to the heart of the ancient city, sweeping past the catacombs, the baths of Caracalla and the Circus Maximus on the way to our lodgings at Torre Argentina, only yards from where Julius Caesar met his untimely end!

After a quick sample of the local cuisine, our sightseeing began. First on the list was a visit to the Galleria Borghese where we teased our way through one of Mr. Conry’s cryptic treasure hunts, uncovering works by Bernini, Raphael, Caravaggio and Titian along the way. The highlights were Bernini’s marble sculptures of Apollo and Daphne, the Abduction of Persephone and, of course, pius Aeneas rescuing his father and young son from the flames of Troy.

There followed a post prandial trek to what remains of the Forum Traiani and to Trajan’s column, a spectacular 40 metre carved column built by Emperor Trajan in 113 AD, depicting the Roman conquest of Dacia. This was wonderfully presented by Cian Horneck Johnston and Ciaran Woods. After a long day Somnus mercifully interceded!

The thirteen tourists were up well before prima lux, and, having sampled a delicious continental breakfast, readied themselves for a long day of sightseeing ahead. The first site on the itinerary was the Arch of Titus in the old Roman Forum. This was a triumphal arch built in 81 A.D. to mark Emperor Titus’ pacification of Judea. Conor Galvin and Rory McMahon gave a presentation on the monument before leading us along the Via Sacra into the centre of the Roman forum. Another treasure hunt ensued as we puzzled through the inscriptions on the Temples of Saturn, of Vespasian and Titus, and of Antoninus and Faustina, and marvelled at the remains of the vast concreted-vaulted Basilica Maxentius.

Following a path between the Temple of Vesta and Temple of Castor and Pollux, we climbed to the top of the adjacent Palatine Hill, the site of the first settlement in the city (Pallanteum) and, years later, home to the Roman emperors. Today the hill is dominated by the ruins of Domitian’s Imperial Palace, which was so large that the hill had to be extended just to accommodate it. We looked down from the palace, as the emperors must have done in their day, at the site of the old Circus Maximus stretching out below us and our minds turned to the most pressing problem of the day: lunch. Pizza and pasta proved once again to be dependable staples.

Lunch was followed by a whistle-stop visit to the church of San Luigi dei Francesi, to see Caravaggio’s Conversion of St. Matthew, before once again returning to the streets of Ancient Rome and the Mercati Traiani (Trajan’s Markets). This impressive arcaded complex was the world’s first multi-storey shopping centre. The group climbed to the roof terrace of the arcade and looked out over the ruins of the Basilica Ulpia as the sun set on our second day in the eternal city.

On Sunday evening we met with Fr. Gerry Whelan S.J. who celebrated mass for our group in the chapel of the Pontifical Gregorian University. This was followed by a fascinating talk on the early Christian Church in Rome by Fr. Gerry, who lectures in the University. Fr. Gerry joined us all for dinner, showing us to a wonderful family run, Jewish-Italian restaurant, where the pasta was superlative!

Still not happy with our day’s sightseeing we took an amble through the city to the Pons Fabricius (Fabrician Bridge) which is the oldest bridge still in daily use in the world; built in 62 B.C., it predates Julius Caesar’s first triumvirate! This was followed by a walk towards the colonnades of St. Peter’s Basilica in the Vatican.

A 7 o’clock rise heralded an important appointment. We made our way across the Tiber to Vatican City for a private tour of the Scavi Necropolis, an ancient Roman burial ground directly under St. Peter’s Basilica. Our tour guide regaled us with the story of the excavation and the discovery of what is believed to be the tomb of St Peter. Leaving via the papal crypt, the group went above ground to see the vast basilica itself and Michelangelo’s pieta statue.

Our next stop brought us to a grittier side of Ancient Rome, the Flavian Amphitheatre, or as it is more normally known, the Colosseum. This arena was built by emperor Vespasian as a place to hold gladiatorial games and accommodated over 50,000 spectators. Marc Bollee and Ruairi Gildea gave us a superb guided tour through the complex.

Nearing the end of our tour, we had saved the best of Ancient Rome till last. The penultimate pitstop was to the Pantheon, built first by Marcus Agrippa, and later remodelled as a temple to the seven planetary gods by emperor Hadrian. A world class presentation by Jack Fanning and yours truly allowed the group to get a deep appreciation of the beauty of the Pantheon. Not far from the temple was Bernini’s Trevi Fountain where we partook of a well earned break and some local gelati. As the water trickled over Oceanus and his tritons, we cast our minds back over the last 53 hours.

However, one last attraction still beckoned: The church of the Gesù. This is the Mother Church of the Society of Jesus which holds the tomb of St. Ignatius and also the right arm of St Francis Xavier. There was just enough time to visit and pay our respects before setting off on the long journey back to CWC.

Now versed in the mores Romani (Roman ways), the Latin class will always look back on this trip with the fondest of memories… that is when our feet stop aching from all the walking!