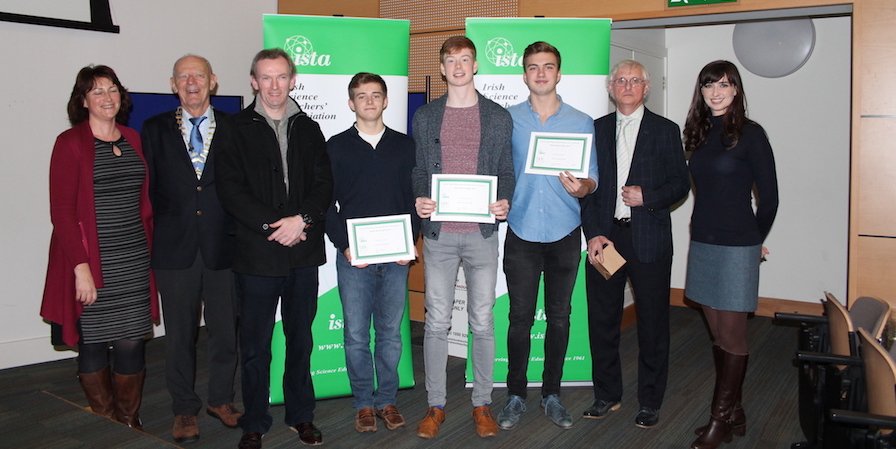 The tradition of science and mathematics is alive and well in Clongowes Wood and on Thursday, 17th November, the college received another accolade by coming first and second in the Regional ISTA Senior Science Quiz. This feat entitled them to attend the National Finals held in Trinity College on Saturday, the 26th November. Conor Galvin takes up the story…

At the National Finals of the ISTA Senior Science Quiz, which took place in the Tercentenary Hall in Trinity Biomedical Sciences Institute there were forty-five teams competing from twenty different counties across Ireland. From the opening, it was clear that the standard of the questions had been raised, but after the opening two rounds, both teams were placed in the top ten and within touching distance of the lead. Buoyed by a strong performance in the middle rounds however, the Clongowes teams were in joint first and joint second after five rounds.

Unfortunately, a string of tricky questions in the sixth round caused a slight slip-back, and – despite strong showings from both teams in the final rounds – it was not enough to get back to the top. The team consisting of Jack, Lorcáin and Marc finished in joint fourth, two points back from the leaders, whilst the team consisting of Liam, Conor and Colin was a solitary point further back in joint sixth. Although we were slightly disappointed that we were not able to find one or two more correct answers and join the leaders at the top, I think that everyone was thrilled with the result on the whole.

The two top-ten finishes from an initial field of over three hundred and fifty teams from across the country is testament to the fantastic science faculty, and on behalf of all of the students involved, I would like to thank the Clongowes science department for their support before the quiz, and in particular to Mr. O’Hara, who had put us through our paces with hundreds of practice questions in the nights leading up to the quiz which proved to be extremely helpful and valuable and gave us the best shot possible at highly achieving in the quiz.