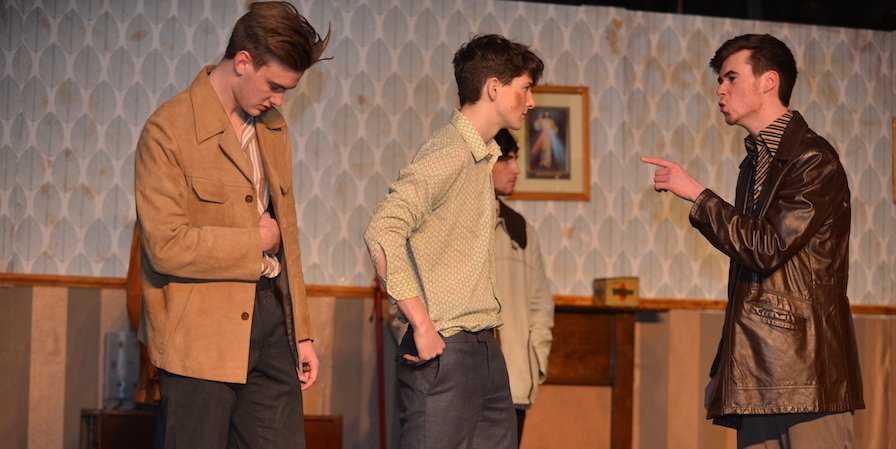 [vc_row][vc_column][vc_column_text]Tom Murphy’s 1961 work, ‘A Whistle in the Dark’, is a brave play for any group to put on. Dark, notoriously violent and essentially dismal, it succeeds or fails like few others on the actors’ individual understandings of the tensions between the innately discontent characters, the Carney family and their gang. On one level, it’s a simple tale of Mayo emigrants in Coventry trying to establish a local powerbase through fighting other gangs. On another, it’s a complex web of masculinity, interfamily tensions, vulnerabilities and the inability to see that their love of violence leads to repeated failures, malaise and poverty.

This feisty production, directed by Mr Tom Carroll, exposes these tensions well, grounded in deep understandings of the individual roles by the actors. Body language and stage presence play a major part in making this such a successful interpretation of Murphy’s work, one of which we can’t help feeling the playwright would have approved.

Keanan Crutchley does a tall and steady Michael, the earnest Carney brother who is at once trying to start a new life with his long-suffering and ineffectually complaining wife Betty (Susan Bourke), while at the same time filling a supportive fatherly role for his brothers. Their actual father Dada, (Jonathan Courtney) is anything but steady, swinging through a myriad of humours ranging from whimsy, authoritarian violence, the angst of failure and cowardice; he stirs his sons to fight for family honour and then skulks off when the action is taking place. The junior Carney brother Des, engagingly played by Rory McMahon, acts as the soothsayer, interpreting family interactions as so often done by the youngest. Daniel Lumb brings a curiously laconic menacing anger to the gang leader Harry Carney in a very fine performance. Conor Keegan gives an exuberant glee to gang member Mush, which swiftly turns to fear as the Carneys turn on him. Rory Gavigan and Sean Butler as Iggy and Hugo Carney deliver their lines with panache, and are imposing presences on stage.

Ultimately, what works so very well in this production is that each actor engages closely with the physical and oral interpretation of their own roles, contributing to a collective tension that manifests in the shocking climax of the final scene, as the Carneys turn on their own.

Dr Ida Milne is a social historian, who holds an Irish Research Council and Marie Curie Actions Fellowship at Maynooth University, working on a project on childhood illness in 20th century Ireland. She has drawn extensively on  the Clongowes archives (with the help of archivist Margaret Doyle) in her work. Ida has written historical articles for both ‘The Clongownian’ and ‘Clongowes Life’.[/vc_column_text][vc_single_image image=”23857″ img_size=”full”][/vc_column][/vc_row]