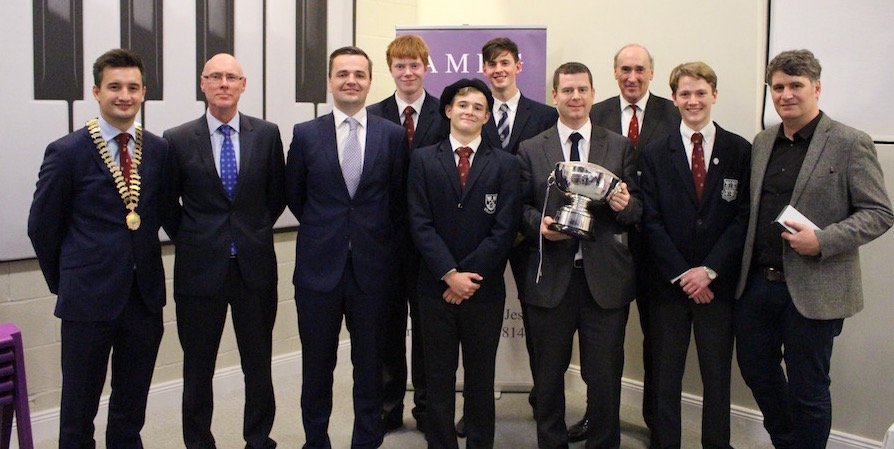 The Music Performance Area was filled to capacity last week (Tuesday 15th, November) for the annual Past versus Present debate. This event has been held in the College each year since 2007 and was first launched by Fr. Conor Harper S.J. and Mr. Anthony Kenny (OC 55). Officially known as the Daniel O’Connell Memorial Debate, teams of past and present Clongownians vie each year for the Daniel O’Connell Trophy, which was kindly donated to the Higher Line Debating Society by Mr. John Fitzpatrick.

Given the shifting political landscape of the last few months, this year’s debate could not have been more relevant as speakers took to the podium to argue both for and against the motion that ‘This house believes that Ireland should seek to exit the EU.’

The standard of debate on the night was superb, and it is a testament to the strength of both teams that the adjudicators took nearly half an hour to reach their final judgement. During this time the chairperson and president of the Clongowes Union, Mr. Andrew Lynch (OC 04), took questions and several impromptu speeches from the floor.

When the adjudicators returned to give their verdict, they remarked on the high standard of public speaking and commended the present side, in particular, for the fluency with which they spoke without notes or a script. The adjudicators also credited both teams for the analytical and logical way in which they engaged with the motion.

The speaker of the night was awarded to Marc Bollée of the present side for his incisive critique of the Lisbon and Nice referenda. The highly commended speaker was awarded to Matthew Dempsey of the past for his impassioned defence of the EU and the bleak warning which he put to the house on the pitfalls of leaving this community. Although it was a difficult decision to reach, the adjudicators were unanimous in their judgement that the motion was defeated and that the past side were the winners for 2016.

The discussions and reminiscences continued well into the night as speakers and guests retired to the castle for drinks and dinner. It was a particularly special evening and a very important opportunity for the boys of the present to meet some of the Old Clongownian community who are still active debaters.