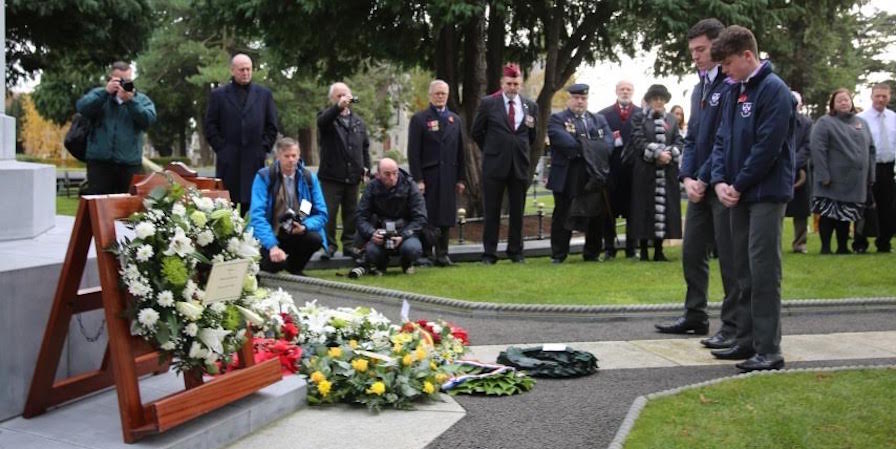 The hearts of Clongownians worldwide will have beaten a little faster and their pulses quickened last Friday when John Vincent Holland (OC 1909) was amongst those remembered at a wreath laying ceremony in Glasnevin Cemetery, Dublin. The wreaths were laid in an Armistice Day ceremony at the Cross of Sacrifice, to remember the thousands of Irish men and women who died fighting in the First World War. Holland was one of four Irish men who received the Victoria Cross for their bravery in the First World War in whose memory commemorative stones were unveiled at the event.

Old Clongownians had responded to the urging of John Redmond in large numbers and played a prominent role in the Irish contribution to the Allied effort in World War I. Over 600 past pupils participated in the War and 95 lost their lives. Among them were Redmond’s own brother Willie and Thomas Kettle, both of whom saw service and met their deaths on the Western Front.

Last week’s event was attended by the British, US, Canadian and German ambassadors and addressed by Minister for Public Expenditure Paschal Donohoe, who said he was honoured to have the opportunity to take part in the Armistice Day commemorations:

‘Hearing the stories of those whose plaques are being unveiled also brings real life to proceedings and gives us a sense, and an understanding, of the courageousness and selflessness of those we commemorate here today.’

Since the inception of the Victoria Cross in 1856 Old Clongownians have been recipients of this prestigious award on four occasions: Captain Thomas Esmonde from the Crimean War; Thomas Crean from the Boer War; John Vincent Holland from the First World War and Lieut. Commander Eugene Esmonde (a kinsman of Captain Thomas Esmonde), who was posthumously, awarded the V.C. for heroism in the Battle of Dover Strait in 1942.

John Vincent Holland (1889-1975), soldier and VC holder, was a native of Athy, County Kildare, who attended Clongowes in 1906-09. He abandoned veterinary studies for a more adventurous career in South America, which included ranching, railway engineering and hunting.

Returning to Ireland on the outbreak of World War I, he was commissioned into the Leinster Regiment. He was wounded at the second battle of Ypres in 1915, but recovered to take part in the Somme campaign of 1916, serving as bombing officer in the 7th Battalion of the Leinsters, with the rank of lieutenant. On 3rd September he played a crucial role in the capture of Guillemont, rated as one of the great achievements of the 16th (Irish) Division.

Having bombed dugouts in the area of his initial objectives, he led his group of twenty-six bombers through the British artillery bombardment into the main section of the village – still occupied by the Germans – where he continued his attack, eventually taking fifty prisoners and breaking the resistance of the defenders. Only five of his party survived the action unscathed. For his bravery, he was awarded the Victoria Cross. Remarkably, he was quite ill during this action, and after the capture of the village was immediately admitted to hospital.

A modest man, he attributed his award to ‘the fidelity and extraordinary gallantry of the men’ he commanded. He received a civic reception on his return home, but did not remain in Ireland. After a time in the Indian army, he was employed by the colonial service in Kenya. He served as a major in the Indian Army in World War II (in which one of his sons was killed) and finally settled in Australia, where he died at Hobart, Tasmania. He received a state funeral in Australia.

Dr Murtagh is the author of Clongownians of Distinction, A Guide to the Serpentine Collection (copies available from Ms Margaret Doyle: mdoyle@clongowes.net).