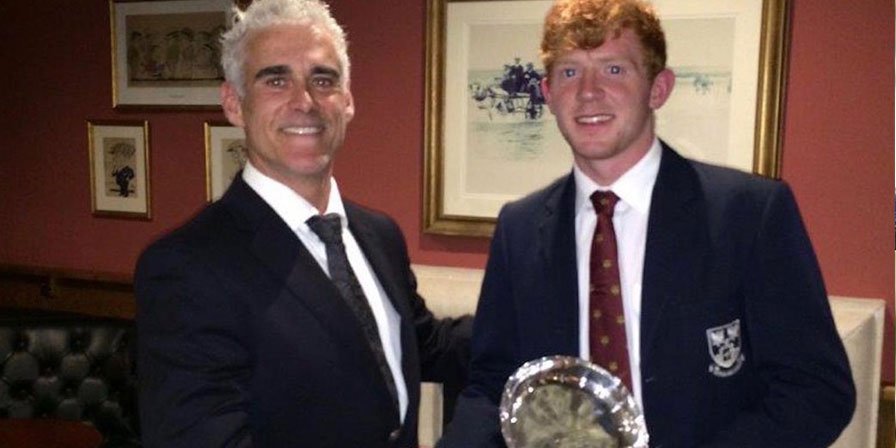 In 1978, to mark our success in the Leinster Schools’ Senior Cup, J. Brendan Prendiville (OC’40) presented the Prendiville Plate for annual competition between the Past and the Present. All of these matches have, to date, been played at Portmarnock Golf Club with the addition of a return fixture in Clongowes. This year the Portmarnock leg took place on Wednesday, 5th October. That ‘man for all seasons’ and current Rector, Fr Michael Sheil, SJ (OC’56) accompanied Connor Mulholland, Robbie Sullivan, Colm Walsh, Billy Minch, Eamon Ward, Hugo Dwyer and Paddy Culhane as they attempted to win back the coveted trophy from the good gentlemen of the past. Connor takes up the story…

The Prendiville Cup took place last Wednesday the 12th of October, in Portmarnock golf club. This is the annual past vs. present golf match, in which the past is usually very successful. The present team, captained by Connor Mulholland, set off with the intention of ending the 8-year drought for a present victory. Five other members of Rhetoric and one Poetry student were the men given the responsibility of avenging the previous eight losses.

The present were greeted in the clubhouse by what seemed to be an unintimidating past team. After a snack and the announcing of the pairings for the afternoon four-ball format, it was straight into battle for the seven Clongowes men and the Rector, Fr Michael ‘Mocky’ Sheil, who plays for the present team by tradition (for the last 100 years or so…).

It was looking up after a few holes; the past team obviously hadn’t warmed up sufficiently and the present were leading in most matches. However, after nine holes the gentlemen of the past had warmed up and battled back to all square at the halfway point. It was now that the sting of the past pupils was felt. As members of Portmarnock these men know their way around the track and, before the present team knew what was happening, they were down in all matches.

Fr. Sheil and Paddy Culhane managed to hold on for a half, but it was to no avail with all the other pairings falling short at the hands of this “unintimidating” past team. In the end it was the past that held their heads up high, as Henry King (OC ’83) was awarded the trophy by the envious captain of the present team, Connor Mulholland (above).

However, the gentlemen of the present were not completely dismayed as the prospect of refreshments and a fine dinner still remained and they took full advantage of this opportunity leaving their plates clean. ‘Mocky’s’ driving ensured that the boys made it home in time for late night study, in which they had opportunity to reflect on the mistakes that they had made that day around the beast that is Portmarnock GC.