‘A man of vision’ 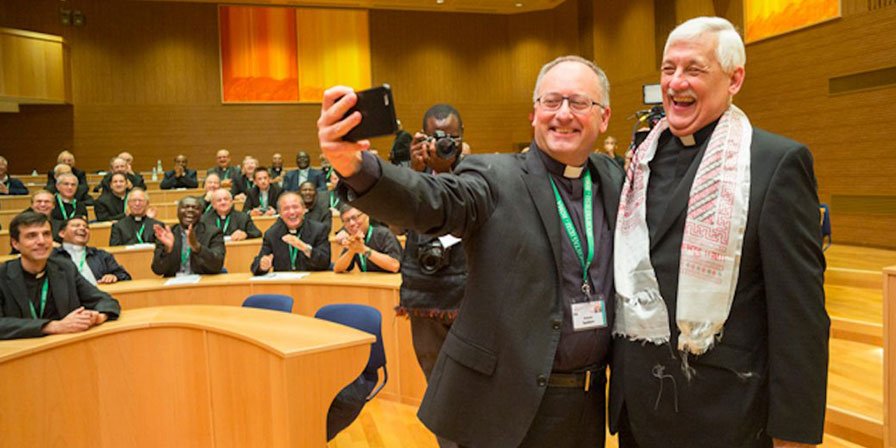 The new leader of the Jesuits worldwide is ‘decisive, visionary and has a great sense of humour,’ according to Gerry Whelan SJ, an Irish Jesuit who lectures in the Gregorian University in Rome. Fr Arturo Sosa (on the right above), newly elected Father General of the Jesuits, was until now, Gerry’s Provincial in Rome, and he’d met with him only six months ago for his annual review.

In an interview with Pat Coyle of Irish Jesuit Communications, Gerry gave his reaction to news of the election in one word – joy. He explained how the murmuratio – the unique Jesuit process to elect a leader – has once again resulted in the right man for the task ahead. He notes also the significance of the Society electing a non-European for the first time in its history.

Gerry describes Fr Sosa as a very decisive man, familiar and comfortable with leadership roles. He says he’s not afraid to get into the middle of complex or fraught situations in order to work for a good outcome. A native of Venezuela, he was involved in a mediation role with the controversial government of Hugo Chávez. He set up a university in one of the poorest regions of the country. And his academic credentials leave him well placed to understand societal and political structures.

At a personal level, Gerry says Fr Sosa  is a warm and robust extrovert who he believes will make a fine leader for the Jesuits. He says he possesses the qualities needed to lead the Society as they follow in the footsteps of Pope Francis, adapting a faith that does justice to the challenges posed by our globalised world.

God is with us

The new Father General of the Society of Jesus has given an extensive interview which throws much light on the man himself, his Jesuit life and the desires that draw and drive him. Speaking on camera to the General Congregation communications team in Rome, Fr Arturo Sosa describes his childhood days in Venezuela, a country struggling to move from dictatorship to democracy. His extended Catholic family and their closeness was important to him, and he was deeply affected by the fact that they could not express their faith openly. Consequently, the depth of their faith was not immediately obvious. “As I grew up,” he comments, “I was always fighting to go a little further beyond what there was to be seen.”

His father had a love of travel and learning. He was, Fr Sosa remarks, “one of a possible ten men in the whole country who read Time magazine”. This meant that as the young Sosa grew up his eyes were “opened to an ever-greater reality so that I would not remain enclosed in what I already knew”.

Seeds of his vocation were sown in early school days. The Jesuit brothers who taught him, as well as those whom he encountered later fixing buses or cooking, cemented his decision to join the Society. Interestingly he says that his attraction to the Jesuits was always in the context of helping to build his country and that he and other people of his generation believed in the need to build Venezuela as a society and a nation.

Fr Sosa gives interesting insights into the impact of Vatican II in the Latin American setting. He notes that the Council was especially important because the Venezuelan Catholic Church was so fragile. When he went to study theology he had to go to Rome because there we no opportunities to study it in his own country. But the years in Italy’s capital were “crucial for opening me up to other perspectives of society, Church and the Society of Jesus.”

At that time also the famous 32nd General Congregation was taking place. He has memories he will never forget of Father General Pedro Arrupe sharing with them the importance of that congregation.

In spite of the high drama in Rome, Fr Sosa wanted to do his fourth year theology in Venezuela. Fr Arrupe was very understanding, having been influenced to this end by the Irish Jesuit and Provincial Cecil McGarry.

After theology he studied Social Science, but his academic work always involved a pastoral and reflective dimension. “In Barquisimeto we promoted savings and credit co-operatives in the city, and farming co-operatives in the rural areas. Our times of shared reflection were very interesting.”

When he became Provincial in 1996 he knew he had a formidable body of work ahead of him, strengthening the identity of the Province in his native country. Not only did he and his team build on Jesuit vocations and develop various institutions, but also working with lay colleagues they developed a long-term apostolic project, which is still under way and won’t finish until 2020. All this was formative for him. “It was then, at a very personal level, that I had the intuition that the apostolic mission does not belong to us …I experienced this as I encountered people on the mission with greater dedication than one had oneself.”

At that time also he was in contact with the wider Church and the Society of Jesus throughout Latin America, which lead to “three outstanding experiences of joint building efforts,” in those years.

He also talks of his time in Táchira, Venezuela, working in the university there on the border with Colombia. The key aim of their work with students from the region there was to give them a holistic formation that was more that just academic. Since they were so near Colombia he also worked with other Jesuits in an inter-provincial project that joined the two countries, creating a new and extensive apostolic area of Jesuit works.

In later years he spent more time in Rome at attending General Congregations and also as a non-resident or ‘flying’ assistant to the recently retired Father General, Adolfo Nicolás SJ. Eventually the flying or ‘fluttering’ was to stop and he was called to Rome to take responsibility for all the international Jesuit houses there, despite his voiced conviction that he had no competency for the job. He has met with Pope Francis on a number of occasions and says his recent address to the society is of critical importance.

Fr Sosa describes himself as a ‘calm’ person who is not perturbed when looking to the future. He believes it is ultimately in God’s hands. Nonetheless there is work to be done for His mission. The two themes fundamental to this mission are collaboration and multiculturalism. “You can find Jesuits, true Jesuits, in every region, in every colour, in every activity. I think that is a sign of the Church for the world.”

He concludes by saying that the Society of Jesus is very much alive. “Our passion is founded on the certainty that we accompany the people with the guarantee that God is with us.”