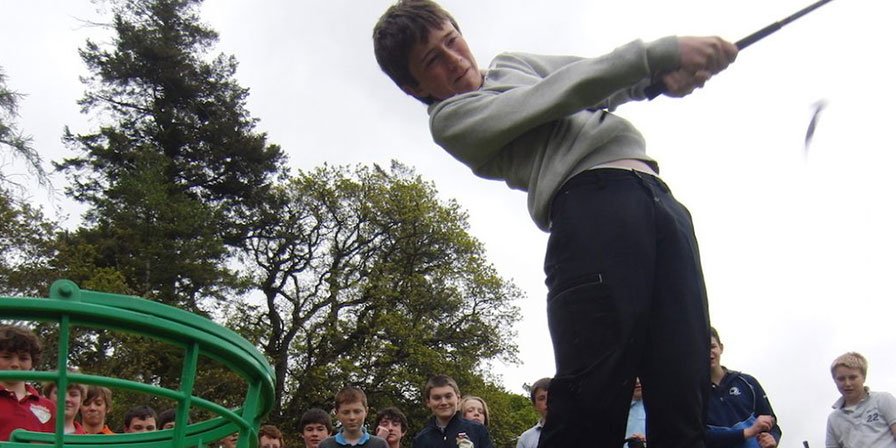 The sterling efforts of Mikey Mina Ronayne (see below) in the recent Leinster Under 15 matchplay final and the imminent Past v Present Golf Match in this – the 50th anniversary of the opening of the current Clongowes Golf Course – set us reminiscing about the history of the game in Clongowes and also what might have been for the golf course were it not for the needs of the farm.

Clongowes is the proud possessor of a fine nine hole golf course, accredited by the Golfing Union of Ireland, which is always popular and enables both the keen regular and novice alike enjoy the excellent parkland setting but the stretch was not the first such facility in the old school. The Clongownian for June 1913 recorded the opening of a Third Line golf links, that seemed to have run its five hole course ‘through the first and second division Higher Line Football grounds to say nothing of the long grass of the gollymockies ground’; rough from tee to ‘green’.

By the late 1920s there was a nine-hole course ‘incorporating the three cricket grounds’ but things moved up a gear when Fr Frank Joy, SJ (OC’1920) was appointed Rector in 1965. Golf Course Architect, Eddie Hackett ‘was confident that he could fit in a good 18 hole course… on both sides of the front avenue. Alas this plan was vetoed by the Minister who needed the land on the farmyard side of the front avenue as well as the land from Cappolis Cottage to the ‘Gollymocky’ for agricultural purposes. As a consolation he donated the land now occupied by the nine-hole track that we know today.

The Higher Line Prefect, the much missed Fr Ray Lawler (OC’38 – a keen golfer himself) took on much of the early donkey-work on the course aided by Mr Eddie O’Donnell, a Jesuit scholastic, who helped in the formation of a club and the arrangement of competitions. Honorable mentions also to Fr Jack Brennan, SJ (Rector) who financed the first trees and Fr Frank Frewen, SJ for their work on the fledgling course.

In 1978, to mark our success in the Leinster Schools’ Senior Cup, J. Brendan Prendiville (OC’40) presented the Prendiville Plate for annual competition between the Past and the Present. All of these matches have, to date, been played at Portmarnock Golf Club with the addition of a return fixture in Clongowes. This year the Portmarnock leg takes place on Wednesday, 5th October with the return match in Clongowes on Sunday, 16th.

That ‘man for all seasons’ and current Rector, Fr Michael Sheil, SJ (OC’56) will accompany Connor Mulholland, Robbie Sullivan, Colm Walsh, Billy Minch, Eamon Ward, Hugo Dwyer and Paddy Culhane as they attempt to win back the coveted trophy from the good gentlemen of the past…

Mikey Mina Ronayne writes…The Leinster Under 15 matchplay final between Mullingar Golf Club and Elm Park Golf Club took place over two legs, the first played in Mullingar Golf Club on the 6th of August. There was a great anticipation throughout the families, friends and players for the day, but – alas – the day would not turn out so well for my and teammates and me. Our first two players lost on holes 15 and 16 but thankfully I was able to pull a win out of the bag on the last hole.

The next match would have to go to extra holes as the two players could not be separated. Our final player was one down coming up the Par 5 18th. He made a spectacular eagle but would eventually go on to lose on the first extra hole. The second last match finished on the 21st hole but the result was against us and we trailed Elm Park 1-4 going into the second leg. We knew we had to do something special to win, but it was not to be our day as the first two matches ended in defeat. We lost the Final but it was a great experience and we thoroughly enjoyed ourselves.