Swimming with the Tide 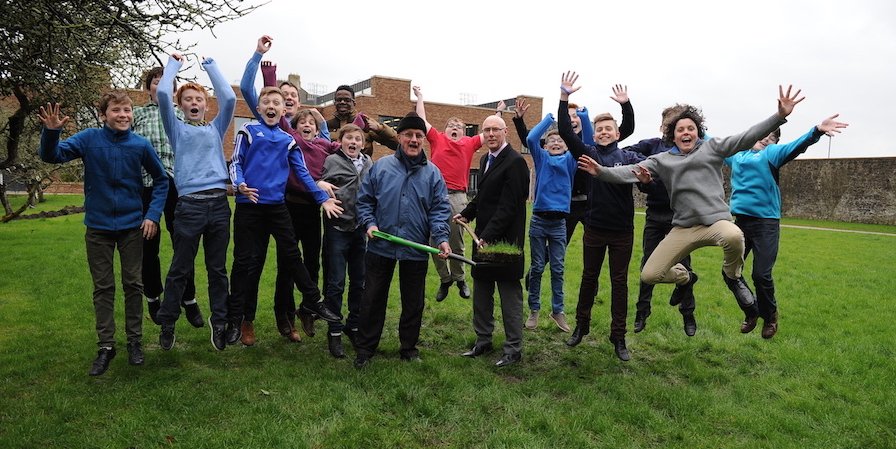 In 1886 Clongowes Wood College amalgamated with its sister Jesuit boarding school in Tullabeg, almost doubling the school population at a stroke and signalling the beginning of an ambitious building programme that would sustain the college for more than a century. Three iconic buildings in the school were constructed, all of which continue to see service today, with the Big Study and swimming pool (the first of its kind in Ireland) fulfilling their original remits, while the college refectory, which was transformed into the school theatre in 1966, was reinvented a dozen years ago as the state of the art James Joyce Library.

The Clongowes campus has continued to expand since then, always marching south, and the furthest outreach of the buildings is now set to be embellished with the construction of a 25 metre, five lane swimming pool with facilities for new watersports activities. Last week the first sod was turned on the site for the new pool, which is due to enter service in September 2017, 130 years after the first pupils disturbed the waters of its predecessor.

The Headmaster, Mr Chris Lumb said that we are delighted to be turning the sod on this very exciting project which marks a new era at Clongowes and noted that we are very grateful for all the donations that make projects such as this possible.

As in 1887, this pool is the latest addition to a portfolio of exciting new structures that include the Science, Art and Technology Building and the 1,000m2 Sports Hall and Gymnasium (2010). The new facility will be located adjacent to the Vincent Murray Park – with its artificial playing surface – and the Sports Hall, which together comprise the hub of sporting activity within the college. It will complement the many outdoor facilities that Clongowes students already enjoy including grass and all weather pitches where rugby, soccer, gaelic games and cricket are played, as well as a Golfing Union of Ireland approved nine hole, golf course.

The amalgamation of Clongowes and Tullabeg in 1886 brought the new college into the modern education system that had commenced seven years earlier with the introduction of the Intermediate Education Examination (now the Leaving Cert). The school has gone on from then to produce generations of successful  students as well as many successful sportsmen. The addition of the swimming pool to the exisiting suite of sports facilities will continue to ensure the essential combination of healthy minds and healthy bodies as we continue through our third century.

Clongowes has changed much over two centuries and will continue to do so and thereby to grow and prosper, but it is the continuity and fidelity to Christian teaching and the visions of St Ignatius for the Jesuit mission and of Fr Peter Kenney for the school he founded in 1814 that will stand to us in the straitened times we live in and the challenges, which lie ahead.