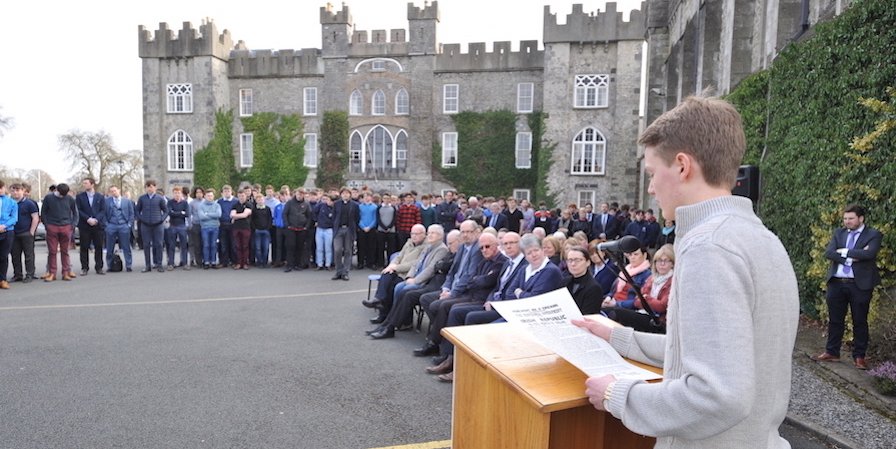 Tuesday March 15th was declared Proclamation Day as part of the national commemoration of the 1916 Rising and we in Clongowes took special pride in the commemorations given our special link with the national flag, courtesy of Old Clongownian, Thomas Francis Meagher…

The event was co-ordinated by Clongowes Archivist, Ms Margaret Doyle and took place in a specially prepared area in front of the castle while a large contingent of pupils and staff observed. Ms Doyle set the scene before Mr Declan O’Keeffe, Head of Communications and a historian told of how Thomas Francis Meagher (OC 1839) had returned to Ireland in 1848 with a tricolour given to him by a group of female French Revolutionaries, who were sympathetic to the cause of Irish Nationalism.

Mr O’Keeffe went on to tell how the standard was raised above the General Post Office in Dublin during the Easter Rising of 1916 since when it came to be regarded as the national flag. He closed with the hope ‘that the much longed for peace aspired to by Thomas Francis Meagher and represented by the white band in the middle of the tricolour will continue to break out all over our land now and in the years to come’. (Full text here)

Brian Murphy of Poetry, one of three students from that year to represent the school at the National Flag Post-Primary Presentation ceremony in Croke Park the previous week, then reflected on what the flag meant to him. Brian empathised with Meagher’s ideals, ‘that the nationalist community…can live in a fully integrated, tolerant, understanding and friendly manner…with their fellow countrymen of all denominations and ethnicities’. He sees the flag ‘as a symbol of our national identity and often the main emotional connection, along with our national anthem and Irish language, that the Irish Diaspora, have to our nation’. (Full text here)

Rian McKeagney of Poetry then re-enacted Padraig Pearse’s reading of The Proclamation of the Irish Republic before School Captain, Conor Slattery and Secretary, Jack McCreevy raised the tricolour to a drum roll, courtesy of Steven Thomas Gray (Rhetoric). Musical accompaniment was provided by Ms Catherine Heslin and Mr Martin Smutny and the occasion finished with a rousing rendition of The National Anthem, Amhrán na bhFiann.