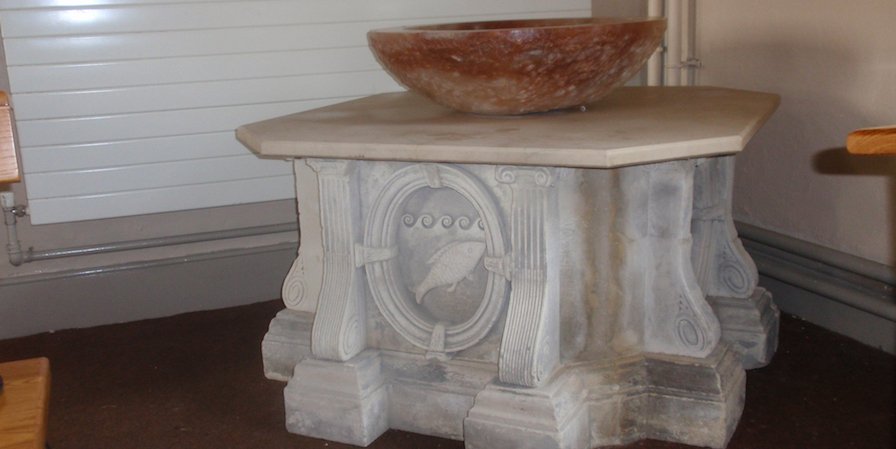 The People’s Church in Clongowes has just received a wonderful piece of memorabilia of Fr John Sullivan – the font in which he was baptised on 15th July 1861 in St George’s Church , George’s Place, at the junction of Hardwick Street and Temple Street in Dublin.

When St George’s ceased to serve the Church of Ireland and was sold some years ago, the congregation there made a gift of the baptismal font to Gardiner Street Church. SFX had already renovated its baptistry and so the gift was of no practical use and it remained in the basement of the Community House until about four years ago. It was then moved to Farrell’s monumental stonemason’s workshop in Glasnevin, where Peter Brennan (Old Belvederian) gave it a temporary home.

Some months ago, Conor Harper approached Clongowes,offering to present the font to the People’s Church, where John Sullivan had ministered for over 20 years – from 1907 to 1919 and from 1924 until his death in 1933. The offer was warmly welcomed and steps were taken to finish the repairs to the font, for it had suffered from flooding when lying in the Gardiner Street basement.

The bowl is a large single piece of onyx, thought to have come from as far away as India or South America. It has a beautiful warm colour which allows light to shine into the stone itself. The base is made of eight segments – with each of the four sides decorated with the Christian symbols – Alpha/Omega –  Ichthus – Chi-Ro – and IHS.

Fr Barney McGuckian [Vice-Rector and Minister] is the latest successor to John Sullivan in the People’s Church – assisted by Br Cha Connor [who has served the PC for over 30 years!] On 16th September 2012, at the start of Sunday Mass – and watched over by Br. Cha  – Barney blessed water contained in the font, confirming that it had at last found a permanent home. It is entirely appropriate that such an important piece of Fr John’s saintly life should be so closely associated with what was a centre-point in his ministry in the locality.

Already, coincidentally,  there is the baptism of a local  child  scheduled for the end of this month in the People’s Church – and her Family was delighted at the news of the arrival of the font, because her Grandparents’ would have known Fr Sullivan. Hopefully, to-day marks another small step onwards and upwards for “our” Fr John.