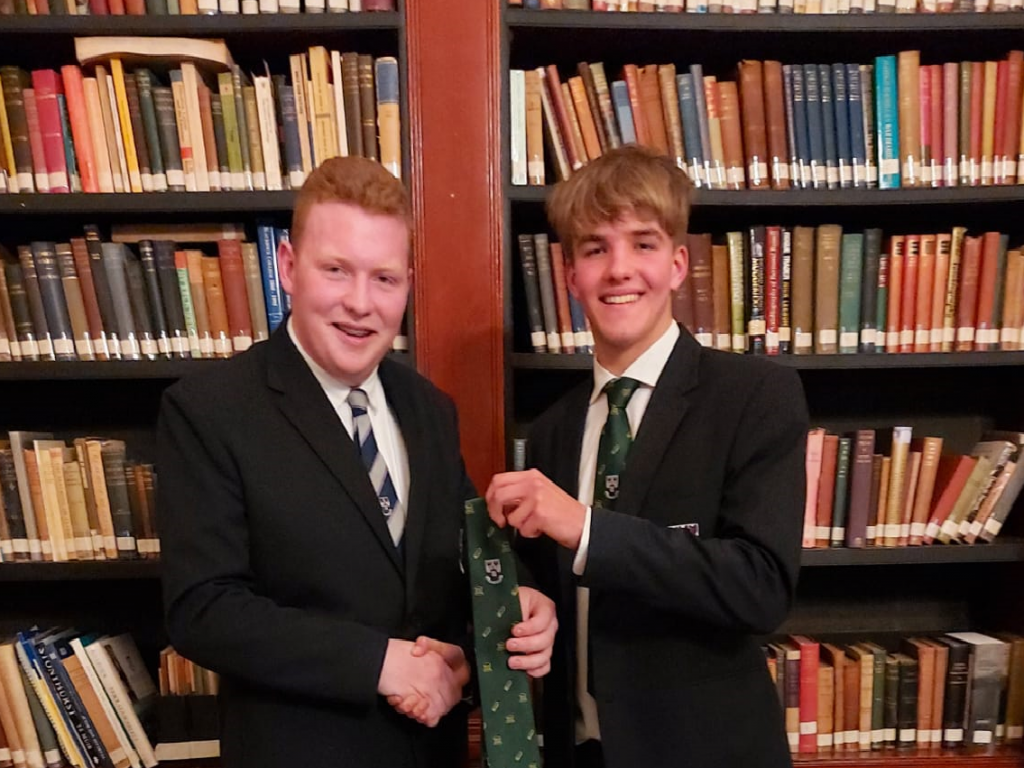 On Tuesday 5th April, Joey Kennedy (Poetry) delivered his presentation to the Academy with a paper entitled “Centenary of Irish Independence – 100 years on” to an audience of assembled staff and students in the beautiful setting of the Fr Peter Kenney SJ Library.

To provide some background on The Clongowes Academy for those that are unfamiliar:  The Academy was set up by Fr Hilary Lawton, Prefect of Studies, back in the 1950s as a modern-day version of Plato’s Academy from Ancient Greece.  It follows a strictly academic model where each member must present a scholarly paper of some 40 minutes to his peers, who then pose questions about his research. Each paper is a culmination of the members’ exhaustive research into and analysis of their chosen topic. The Academy gives its members a chance to become experienced in the research process, public speaking and fielding questions from their audience.

Fr Rector, Michael Sheil SJ, is the Academy’s Moderator and is a former member of the Academy, having delivered a paper on Norman Castles during his Poetry year.  Each session is followed by questions, refreshments and the opportunity for lively discussion on the paper just delivered.

Joey spoke in depth about the following topics:

Joey brought his audience through all of the major events of the Troubles; starting from October 5th 1968, which marked the first clash between civil rights marchers and RUC in Derry, right up to April 10th 1998 when the Good Friday agreement was signed by all sides which brought the end to the violence of the Troubles.

Joey shared with his audience one of his favourite quotes from the late John Hume (SDLP)  from Hume’s Nobel Peace Prize acceptance speech:

“All conflict is about the same thing, no matter where it is, it’s about difference, whether difference is your religion, your race, or your nationality, and the message you have to get across, is that difference is an accident of birth, none of us chose to be born and we certainly didn’t choose to be born into any particular community, there are not 2 people in the room now who are the same, there are not 2 people in the whole world who are the same, difference is the essence of humanity and therefore respect for difference should be a very normal and common thing but it is the first and deepest principle of REAL PEACE.”

During his Academy, Joey gave a fascinating insight into the use of social media by political parties and how it is used to target the younger generation who will be the voters of tomorrow.

Concluding,  Joey expressed his personal wish for a united Ireland but only if it happens with respect for both sides which would result in an “Ireland for All”.

Joey’s paper is definitely worth reading.  Centenary Of Irish Independence