You Can Show No Greater Love - Clongowes Wood College

You Can Show No Greater Love

Home / News / Clongowes Stories / You Can Show No Greater Love 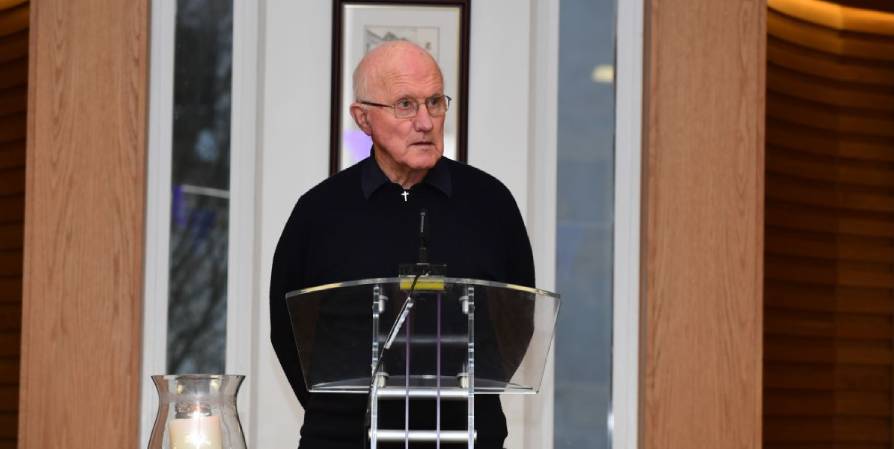 The Gospel of the Mass on Holy Thursday, celebrating the Institution of the Eucharist – is St John’s account of the Last Supper. He, alone of all the Evangelists, does not record Christ’s words This is My Body – this is My Blood. Rather does he concentrate on what Jesus did in the symbolism of His washing of the feet of the Apostles – after which He said: You call Me Lord and Master, and rightly – so I am ……… you must wash each others’ feet. I have set an example for you so that you will do just what I have done for you [Jn 13:15].

He went on to say: You can show no greater love than to give your life for another [Jn 15:13] And He was about to set an example for them by doing just that a few short hours later. It is an ideal which He still proposes for everyone who claims to be a Christian.

I am a very slow reader – taking weeks to finish a book – spending time trying to keep up with the must-reads suggested to me. So it is very rare that I get to read a book twice. I could count the number of them on the fingers of one hand. One of those books is The Unreturning Army – a collection of letters from an Artillery Officer to his Mother during the final year of WWI.

Huntly Gordon finished his schooling in Clifton College, Bristol in June 1916. After an Officer crash-course at the Woolwich Military Academy – the 19-year old Second Lieutenant found himself a year later in Harfleur, near Le Havre, in charge of a draft of 35 R.F.A. men – some of them were old enough to be his father. He gives a quite remarkable first-hand account of that final awful year in the Battle of the Somme – in which Ypres, Passchendale, Meteren, Hell Fire Corner, Salisbury Plain, Birr Road, etc., came to be only too well known. He writes with extraordinary accuracy in all conditions [cold and wet – by moonlight at night and under fire] – giving a sense of the reality of life in the trenches. He describes the incredible [but in those days, normal] class-distinction between officers and the ordinary soldiers. He recounts the horrors of that war right up to the day he is severely wounded in mid-April 1918 and is repatriated to England. He owed his life to the courage of his five companions – including his Signaller – who succeeded in bringing him to safety “under enemy fire”.

After the war, Gordon resumed civilian life – joined London Transport and, ten years later, was appointed Chief Depot Inspector. One day he had to caution a certain Driver Brown who had been late in taking out his early-turn bus – and Gordon noted this in his record and asked him to sign it. As he turned to go, Brown asked if he might say a word – and ventured to ask if his Inspector had been in the war – and had he been wounded in front of Meteren? Very surprised, Gordon admitted that he was – and, in turn, said: How on earth did you know that? Brown replied simply: Well, sir, I was your signaller and helped carry you in. I’m very glad to see you came through all right.

Overcome with emotion and greatly embarrassed, having just admonished and sanctioned the Driver – Gordon wanted to erase the entry against his name. But Brown insisted that it be let stand – for his former Officer, and now Superior, was only doing his duty. The Signaller was awarded the Military Medal for his bravery in saving the life of his Leader and Comrade-in-arms in that war which was to be the-war-to-end-all-wars!

Twenty-three short years later – in WWII there was an even greater example of self-sacrifice.

It comes from one of my favourite Saints – Prisoner #16670. The place was the horror concentration death camp of Auschwitz in Poland.

In late July 1941, after the escape of 3 prisoners – Karl Fritzsch, the Deputy Camp Commander, to deter further escape attempts – chose 10 others to be starved to death in an underground bunker. The usual reaction to those condemned to die in this way was one of despairing terror and, while they lived – all the camp could hear their cries and wailing – until death brought a chilling silence of fulfilled despair. As Fritzsch passed along the lines of the prisoners – picking one here, another there, and so on – one of the selected men, Franciszek Gajowniczek, a young husband and father – cried out: My Wife! My Children!

Suddenly, Prisoner #16670 stepped forward and said quietly: I will take his place!

Fritzsch was so taken aback at this extraordinary gesture that he gave his consent. In the death cell – no longer filled with the cries of the doomed – Prisoner #16670 led the condemned men in prayer – as they awaited deliverance in death. After two weeks of dehydration and starvation only he remained alive – but the guards wanted the bunker emptied.  Prisoner #16670 is said to have raised his left arm and calmly waited for the lethal injection of carbolic acid.

In 1982 he was canonized, as a Martyr of Love, by Pope John Paul II – in a ceremony attended by Franciszek Gajowniczek, the man who owed him his life in Auschwitz 41 years before.

At the Last Supper, Jesus had said: You can show greater love than to lay down your life for your friend! – and He set the example for all Christians as He proved it Himself on Calvary.

For me, Fr Maximilian Kolbe is the greatest Saint of the 20th century – and among the greats of all time. Prisoner #16670, a Polish Franciscan, freely gave his life in those awful conditions of suffering in living and dying – that a companion might live to see his Family again.

In the early 1930s, Fr Kolbe had spent time as a Missionary in China and Japan – and he founded a monastery in Nagasaki, the city which was the victim of the second atom bomb in 1945. Later, he built another monastery in Malabar in south-west India – before returning to Poland on account of ill health. After the Nazi invasion of his country in 1939, his monastery became a temporary hospital and refugee centre – but it was closed down in 1941 and Kolbe and his companions were arrested.

Together they were transferred to the notorious Pawiak prison in Warsaw – and then to Auschwitz where he became Prisoner #16670. There, on 14th August 1941, Maximilian, responding to his Master’s call – and knowing, like Him, the way he would die – gave the greatest proof of his love, as he stepped forward and said: I will take his place!

During these Easter days, reflecting on the Gospel accounts of the first meetings of the Risen Lord – first the women and then the men – we realize that our encounter with Him is both a reassurance and a mission to go out [apostellein in Greek = to send out] and spread the Good News – not just in word – but in deed.

Gordon’s Signaller did not think of himself as he helped carry his commanding Officer to safety – he was only doing my duty.

By his remarkable and selfless act, Kolbe carried out to the letter the command of his Founding Father, Francis of Assisi [the Pope’s Patron] – who told his companions: Go and preach the Gospel – use words only if you have to!

Wasn’t that Jesus’ message when He washed the feet of His Apostles at that Passover Meal He celebrated with them on the night of the Last Supper? In that first Eucharist, He showed He had always loved those in the world who were His own – and He loved them to the end …………. an end which was to herald the Kingdom of God among us. [Jn 13:1]