Standing in the Strength of Silence - Clongowes Wood College

Standing in the Strength of Silence

Home / News / Clongowes Stories / Standing in the Strength of Silence 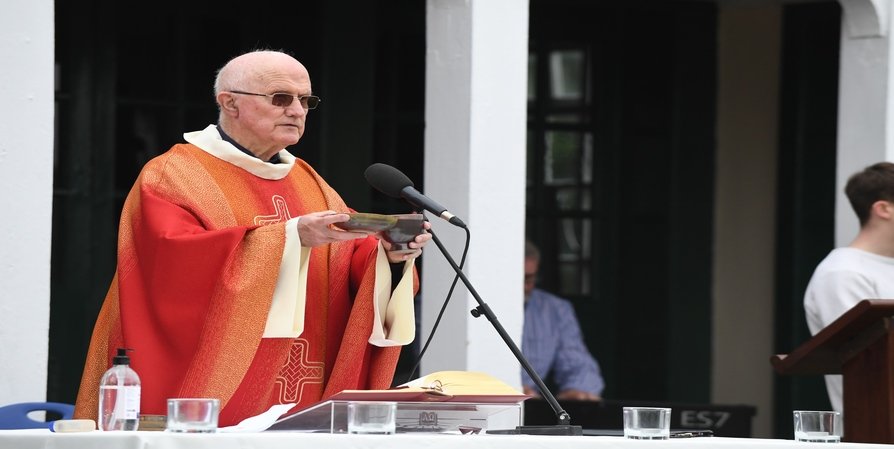 Next week will see the beginning of the Easter Holidays – and, on this coming Sunday, what used to be called Passiontide begins. It is a period of two weeks leading to the Holy Week Triduum – the three days when the Church celebrates the Last Supper and the Passion and Death of Christ – culminating in His Resurrection on Easter Sunday – the first day of the week [John 20:1] 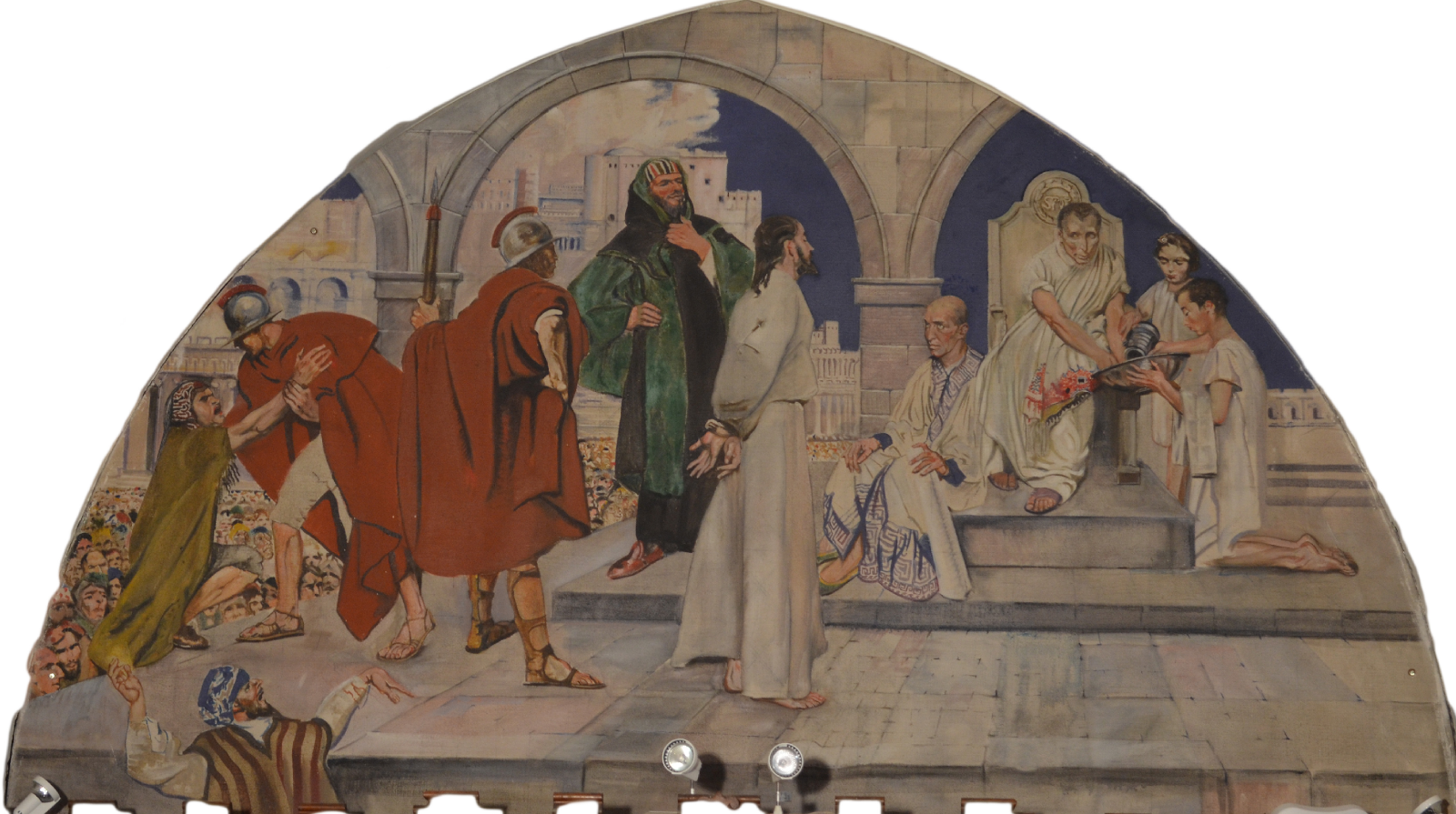 I have always been fascinated by the First Station of the Way of the Cross in the College Chapel in Clongowes. It is the most crowded of all fourteen Stations a panoramic view of Jesus on trial before the Roman Governor, Pontius Pilate. [Matt. 27:1, Mark 15:1, Luke 23:1, John 18:18]

Seán Keating [1889 – 1977] was a young emerging artist who made his name in painting many iconic images of rural Ireland – of the War of Independence – and, later, of the early industrialization of the country in the 1920s and 1930s. The painting of the Stations of the Cross in Clongowes was a prestigious commission for the young artist who had had no previous experience of working in the religious context. What a wonderful success it turned out to be.

There are two interesting facts about his depiction of Jesus’ Way of the Cross to Calvary …………. (i) Keating uses a self-portrait to depict Christ– and (ii) his wife, May, appears as Our Lady. This First Station has always fascinated me as a simply wonderful painting – as well as being helpful for understanding something of the mystery of Christ’s Passion.

May I take you through the painting for a moment before offering something for reflection . . . . .

The central figure in the scene is the victim – Jesus, calm and seemingly serene, stands tall and straight before his judge. Although a prisoner there is something regal in His bearing.

On the right, we see the seated figure of the Roman Governor of Palestine – endowed with the power of life or death overall. But where is there any sign of power in the furtive, anxious, fearful look of the pusillanimous Pontius Pilate? He has said: I am not responsible for the death of this man! [Matt.27:24] Now he washes his hands of the responsibility of the dreadful sentence he has pronounced? (*)

Look also at the curious, disinterested look on the face of the man seated at Pilate’s feet – just another nuisance being got rid of – and so aloof. The green-cloaked High Priest stands arrogant and full of satisfaction at the successful prosecution of the Sanhedrin’s case against the man who dared to claim he was a king and told the people not to pay taxes to Caesar . . . . . If you set him free, you are no friend of Caesar’s! [John 19:12] The sentence demanded is death – by crucifixion.

Security is assured by the strong presence of the spear-bearing Roman soldier immediately on the High Priest’s right. But look again at his companion – unarmed, and far from providing protection for the Roman authority – he is reaching out to help a cloaked man get up to join the group. Keating has not left any information as to his identity – but surely, it has to be none other than the infamous Barabbas, a notorious prisoner – [Matt.27:15] – whom the crowd chose for release rather than Jesus. What an appalling attempt by the craven Governor to save face. [Luke 23:24]

See also the man at the bottom of the painting – and notice the strange light at his right hand. Could this be Judas as he throws back the betrayal money he had received from the chief priests?

Lastly, have a look at the crowd. There must be hundreds, even thousands of people in the street outside. You can make out the features of many of those nearest the Governor’s seat of judgment. There are more between the standing soldier and the High Priest – and still more between the figure of Christ and the seated assistant [a marvellous artistic touch to indicate even more hundreds of far-distant faces by a tiny tip of a brush !]

Which leads me to my reflection as I reflect in wonder before this wonderful painting . . . . . .

There is a small detail which, for me, speaks of the depths of the mystery of God’s love expressed in the helplessness of the prisoner before his judge. Notice the hands of Jesus bound behind his back! He is in no position to remonstrate, to protest against the injustice of it all – the ingratitude of God’s Chosen People towards the Father for His greatest gift – His Son, who came to bring us Life.

Let me look again at Christ. He has always spoken with authority in synagogues – in open fields – in someone’s house – at the water’s edge – in a storm at sea – to the possessed and the sick – and even to the dead. He has already spoken before the Sanhedrin – and now, for one last time in His trial He answers the Governor’s question:  Are you a king?

You say that I am a king. I was born and came into the world for this one purpose – to speak about the truth. Whoever belongs to the truth listens to me. [John 18:37-38] And what is truth ? asks Pilate.

Jesus’ authority now speaks in His silence. The Gospel readings for these remaining days of Lent up to Holy Week have been recounting the increasing hostility of the priests, scribes and doctors of the Law towards Jesus. It would come to a climax at this First Station with Pilate’s words: I am not responsible for the death of this man. It is your concern! [Matt.27:24] – and appear to end in failure.

But let me remind myself that I cannot sit in judgment on those who brought Jesus to trial – for I, too, am there – somewhere among that huge crowd. Every time I fail to live by the truth of God’s Love and share it with others – I also am one of those who cried out: Not this man – but Barabbas! 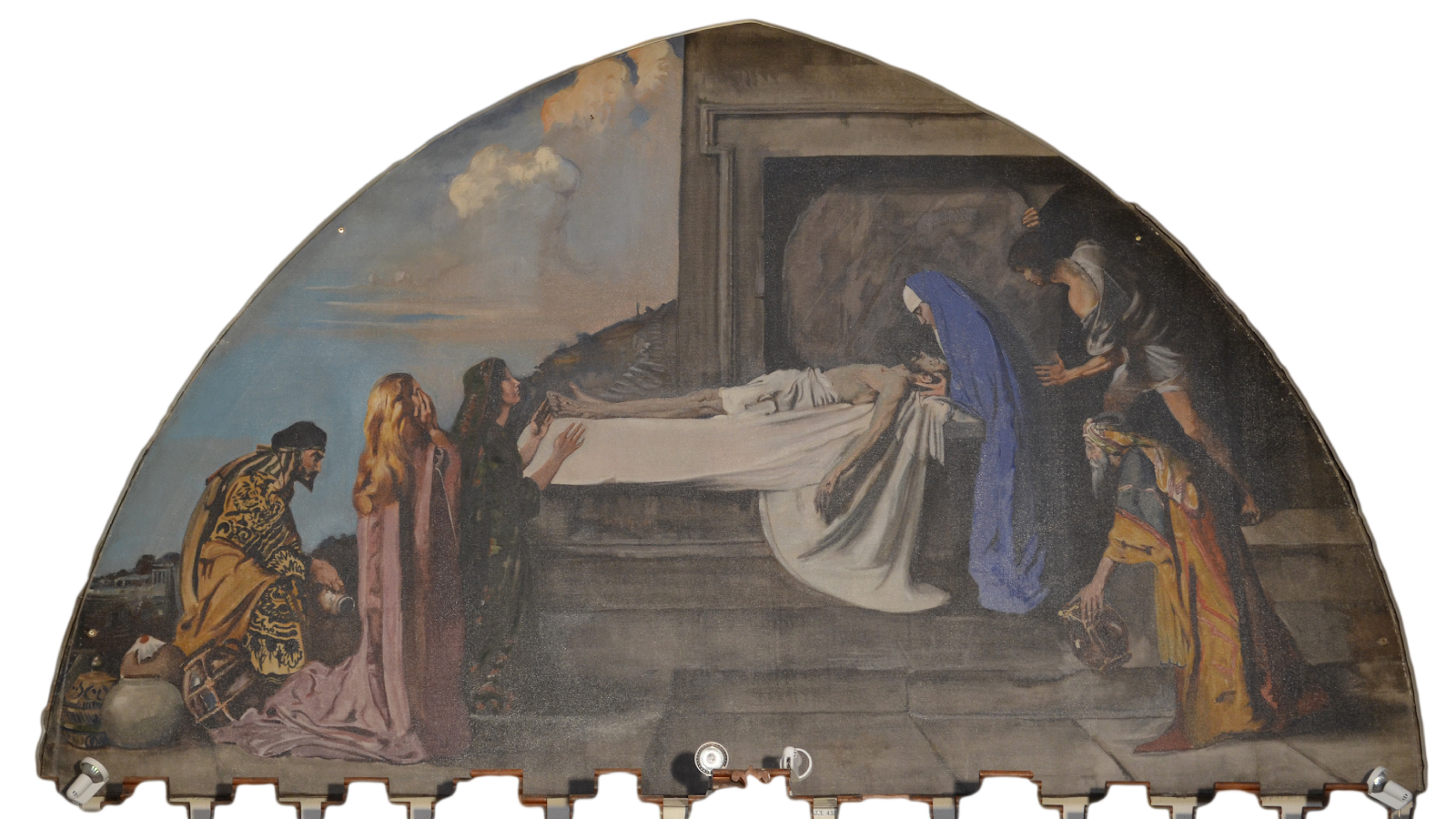 The apparent end in this First Station is, for the Christian, only the beginning. I think that Keating suggests

this very discreetly – as can be seen in the Last Station.

Having followed the suffering and the agony – the horror and the darkness of Our Saviour’s Road to Calvary – which ended in His death . . . . . . . .if you look to the left of the scene of His burial – you will see a small expanse of blue sky – the hoped for promise of His Resurrection!

P.S. (*) There is a well-authenticated story about a disagreement between Keating and the Rector of Clongowes [who died as an old man when I was in Clongowes] which led to the artist abandoning briefly his work – only to return to avenge himself by immortalizing the latter as Pilate!