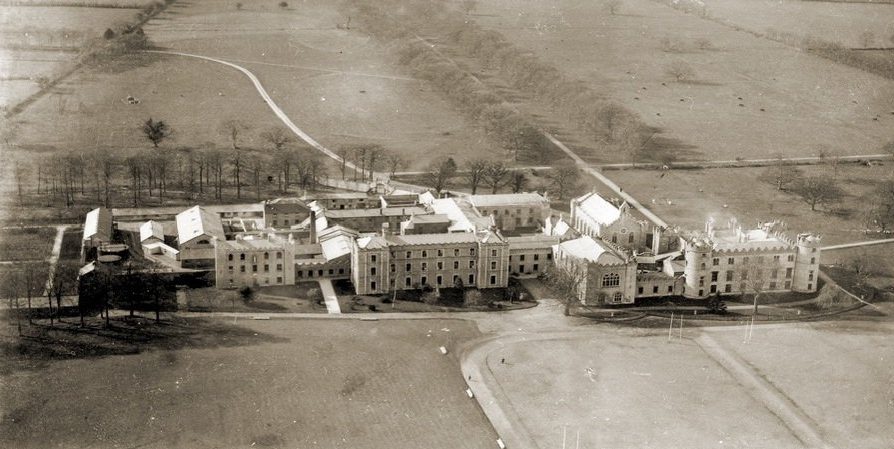 Ireland now stands in imminent danger. If Popery succeeds – our fairest plains will once more witness days worthy to rank with those of Bloody Mary – and the Walls of Derry shall again become the lamentable bulwark against Popish treachery and massacre! Strong words of alarm there!

Strong words indeed! …….. the tocsin was sounded,  I read in that article in the Hibernian Magazine” on 13th November 1813 –  written as Clongowes was about to come into being – over 50,000 school- days ago!

As I wandered through some archival material last week – daring to hope that that dire forecast has not come to pass! – I thought I would share some aspects of what has changed since Fr Kenney & Co. arrived in CWC.  What changes has the old Castle-on-the-Pale seen in the past 200+ years! What would he think to-day?!

Many years ago – when I was HLP – some senior Students made a request that beer be served at lunch – “just as had been the custom in the early days”, they said. I checked out “the early days” for myself – and, to their great surprise – said that I would be willing to go along with that …………  on condition that we all followed the full schedule of the time ………. and I began my research!

The request was quickly withdrawn –  the 20th C. emissaries felt a beer wasn’t worth an early-bird rise!

The annual holidays were from 1st Aug. to 7th Sept. – but some years later, Christmas holidays came in – and  I remember my Father telling us that, in his final year [1914] Easter holidays also arrived.

Continuing my consultation of the daily timetable way back then, I found that Dinner was at 3.30 p.m. – followed by Recreation for an hour [including Games – on a full stomach!] – another 1½ hours’ Study – then Supper at 7.15 p.m. [15 mins!] – followed by an hour for Recreation …… and off to bed at 8.45 pm. Tuesdays and Thursdays were half-days – with Saturday a full class day. Visits from Families were few and far between.

There was a great variety of sports ……… from the very start in 1814 there was a “very primitive form of what developed into cricket – with the bat-shaped exactly like the camán of the hurler”(!) There was the unique Clongowes Gravel Football – handball  – hurling – soccer – hockey – athletics – fencing – boxing – fishing [in the Liffey] – tennis – rugby [1860s] – Gaelic football – greyhounds – cycling – dancing (!).  In all of these – according to a directive of a Rector of the 1830s – the Masters (i.e. Jesuits) were to “share in the recreations of the Scholars, out of doors and within – they should play cards with them (!)  – and be of service with greyhounds (!) and garden-lore”.

Up until modern times there was a special Clongowes-speak ……. Games were called Play-up – written homework was themes – toilets were squares – free days were play-days [with class walks in the neighbourhood – unthinkable with today’s busy roads – and followed by a Full-feed and a film] – no Late Study was sleeps – a snack was frustulum  – corridors were galleries – swimming pool was The Baths – Recreation rooms were Playrooms.

In my own time in the Holiday Camp –  the call was at a less ungodly time of 6.50 a.m. – with daily Mass and breakfast followed by a compulsory walk around the HL track [cricket oval] before Morning Study. Dinner was moved to the more civilized time of 1 p.m. – with Supper at 7 p.m. We had weekly exams on a Sunday morning, after Mass – from 10 a.m. to 12 a.m. – with the results given out by the Prefect of Studies in class during the week – with Place Cards for the top three – but often to the grave discomfort of those who did not make the pass mark!

This is a flavour of what life was like in times past … to us of the 21st century they may seem at least quaint – at worst draconian – but those times and the Masters and Students who lived in them have helped to make Clongowes what it is today. We may have more freedom – but there are also more and greater challenges for all!

We can rightly say that today we stand on the shoulders of giants – we give thanks for the legacy they have left us – may our generation be inspired by their spirit to leave a worthwhile legacy to generations to come!