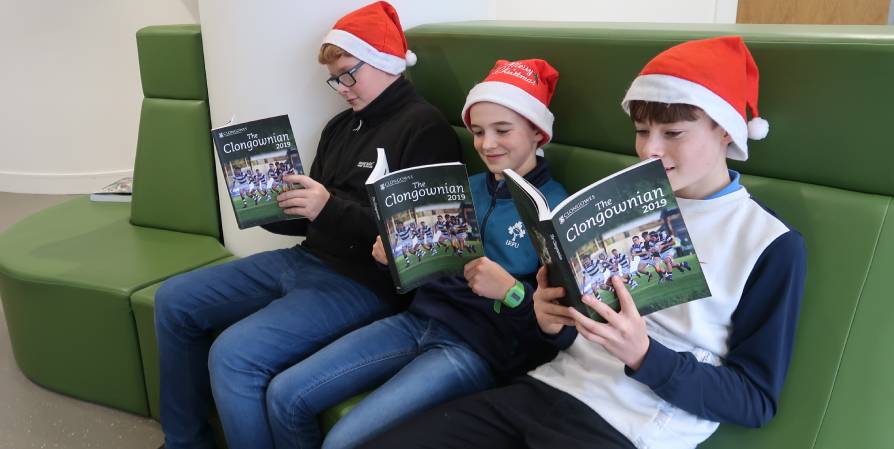 This week saw the arrival of the much-anticipated latest issue of the annual (and historic) journal The Clongownian in Clongowes Wood College. The journal was presented to the Headmaster, Mr Chris Lumb by the editor, Mr Declan O’Keeffe and later distributed to the pupils and staff. Every year The Clongownian attempts to reflect the breadth of activity in the school, be it academic, cultural, pastoral, religious or sporting. Since its foundation in 1895, it has been publishing feature articles, which touch on aspects of the college’s long history and its many distinguished alumni.

The academic year 2018-19 was a signal one in the history of this island as it marked the centenaries of the end of one war and the start of another. The Great War concluded at the 11th hour of the 11th day of the 11th month in 1918 while – a scant ten weeks later on January 21st, 1919 – members of the Irish Volunteers ambushed and killed two RIC officers at Soloheadbeg, County Tipperary, thereby kick-starting the War of Independence. Crucially, just two hours later, the First Dáil assembled in the Mansion House in Dublin and commenced the democratic process that would ensure a smooth transition to native government when the British administration withdrew from much of Ireland in December of 1922. That assembly contained five Old Clongownians and the school continues to be represented in its successors to this day.

A history lesson should really be that – a lesson – and one from which we learn and emerge into a better world. It would have come as no surprise to Fr Peter Kenney and his Jesuit colleagues that Clongownians would emerge as leaders in all of the events noted above (even if they might have baulked at their involvement in the Irish Revolution). Old Clongownians had responded to the urging of John Redmond and played a prominent role in the Allied effort in World War I. Over 600 past pupils participated in the conflict with 95 losing their lives, and their names appear on a brass plaque on the wall outside the Boys’ Chapel today. These men and their peers saw themselves as fighting for Ireland as surely as did the Clongownians who took part in the Irish revolution and the ensuing tragic Civil War.

Both of these strands in our history were commemorated in Clongowes during the past year and both are recorded in articles in this issue of The Clongownian. There is more history in the poignant tale of Fr John O’Donnell MacSheahan (OC’1902), who was sent to Belgium as a military chaplain to replace Fr Willie Doyle (killed in action in August 1917). Fr O’Donnell was at the battle to liberate Ledegem and was awarded the Military Cross for bravery in bringing wounded soldiers to safety. He was the founder and first editor of The Clongownian. The journal also records the continuing story of the Prosperous Crosier, which was given to the National Museum on indefinite loan earlier in the year. But not all that is contained in these pages is sombre or historical. This year also saw the opening of the new learning centre for younger boys, named after Saint Robert Bellarmine SJ, while the new swimming pool, which quietly entered service last year, was officially opened in October by Tánaiste and Old Clongownian, Simon Coveney.

A very limited number of copies of this historic volume is available and may be obtained by sending a cheque for €50 (incl p&p), made payable to Clongowes Wood College, to The Editor, The Clongownian, Clongowes Wood College SJ, Clane, Co Kildare. All proceeds will go to the Alberto Hurtado Bursary Programme.