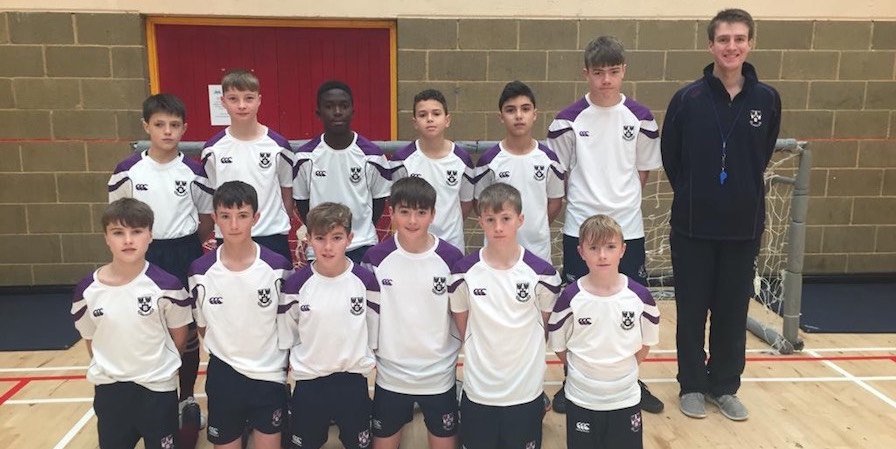 With origins in 1930’s Uruguay, ‘futebol de salão’ or Futsal is becoming increasingly popular in Ireland and, for the second successive year, Clongowes entered the FAI Schools Post Primary Schools Futsal Competition under the guidance of Ms Yvonne Nolan, who takes up the tale…

The competition was coordinated by Ireland Under 18 coach, Mr Jim Crawford and Shelbourne FC Goalkeeping coach Pat Behan. The tournament was refereed by our own Poetry students Dylan Liddy, Jacobo Fernandez, James Baker, Taylor Bergin, Adam Quinn and Joseph Dundon, who were rewarded with free tickets for the FAI senior international between Republic of Ireland and Northern Ireland in the Aviva.

With many elements boys wanting to play soccer, there was no challenge in selecting a futsal squad. Ms Nolan with the support of GAP student, Matt Twomey ran the boys through a series of training sessions, where they had to familairise themselves with the court, the timing rules and the weighted ball. Futsal is a fast sport and time on the ball is limited but it wasn’t long before the skill level rose and it was apparent that the boys could do well.

The boys had wins against St Paul’s Monasterevin, Naas Community College and GC Chill Dara to finish a very credible second overall. This was a great achievement for the Elements boys, who were playing the game for the first time in their first competitive outing.