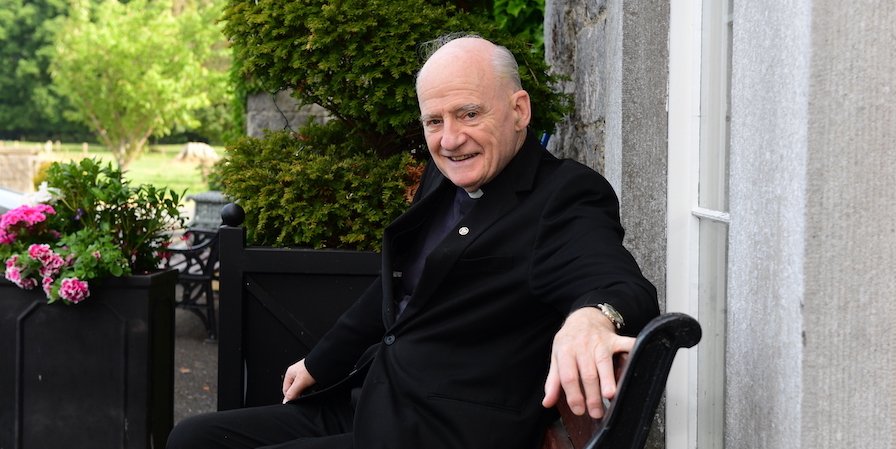 Yesterday, Sunday (September 9th) Fr Bernard ‘Barney’ McGuckian SJ, Vice Rector of Clongowes, concelebrated Mass in the company of his two brothers, Alan (Bishop of Raphoe) and Michael – both Jesuits. The company was completed by the Rector, Fr Michael Sheil SJ, who – just three days earlier – had presented Fr Barney to the school as he marked the occasion of his Diamond Jubilee 60 years after he joined the Society of Jesus in 1958.

In his introduction Fr Sheil ran the rule over Fr Barney’s long career and extensive CV, noting in particular his involvement with the Pioneers and the Apostleship of Prayer and remarking that he is a well-known presence on TV and Radio in these connections. Fr Sheil dubbed him the original extrovert as well as being a wonderful companion in Community, where he is raconteur full of charism and energy. It then fell to Fr Barney to reply:

“Today, 60 years ago I joined the Society of Jesus. 14 of us arrived that day at St Mary’s, Emo. Some left during the two year novitiate and went on to follow different paths in life. I hope to celebrate Mass today with the other two who are still with us: Ronan Geary, a Clongownian and David Gaffney, a past pupil of Mungret, another Jesuit College; I was a boarder at St Malachy’s College, Belfast.

Ten years earlier in 1948 we celebrated the 800th anniversary of the death of our Patron, St Malachy, Archbishop of Armagh and a man of deep prayer. He died on his journey home from Rome in the arms of an even greater saint than himself, St Bernard of Clairvaux. I have never forgotten what we were told on our annual retreat all those years ago. Our retreat master was a member of the Redemptorist Order. He said something to us that I later discovered was first said by the founder of the Redemptorists, a Doctor of the Church and a past pupil of a Jesuit College. ‘If a man prays, he will certainly be saved. If a man does not pray, he will certainly be lost’. As you can imagine, this made us sit up and listen. 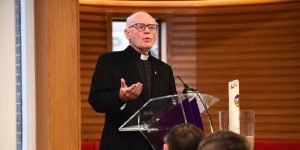 Over the years I have wondered about his assertion. It has been given official approval as it appears in the recently published Catechism of the Catholic Church. The question that it left me with was: ‘what is prayer, if eternal salvation hangs on it?’. It cannot be saying the ‘Hail Mary’ nor assisting at the Sacrifice of the Mass, since the vast majority of the human race have not even heard about either of them. It has to be something that every human person can do and must do. This is one of the reasons why we begin each school day in Clongowes with prayer at Assembly. Many of you probably learned your first prayers at your mother’s knee. Saying your prayers is the least childish thing you will ever do in your life.

Prayer is saying ‘yes’ to God’s offer of himself to me. But He will not force Himself on me. I must accept his offer in freedom. The most perfect example of prayer was what happened when the Angel Gabriel visited Mary of Nazareth and made her an offer on behalf of God. Mary’s ‘yes’ took the simple form. ‘Behold the handmaid of the Lord. Let it be done unto me according to your word’. At the other end of the spectrum was the reaction of a man who had led a life of crime and was on the point of death. Perhaps he had never said a prayer in his whole life. With almost his last breath, however, he spoke to the man dying beside him. ‘Jesus, remember me when you come into your Kingdom’. The reply he received must be the most consoling in all the Scriptures. ‘This day, you will be with Me in Paradise’.”

Dearest Lord, teach me to be generous;

teach me to serve You as You deserve;

to give and not to count the cost,

to fight and not to heed the wounds,

to toil and not to seek for rest,

to labour and not to ask for reward save that of knowing I am doing Your Holy Will. 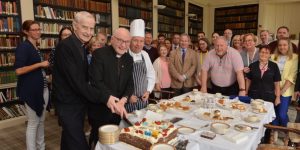