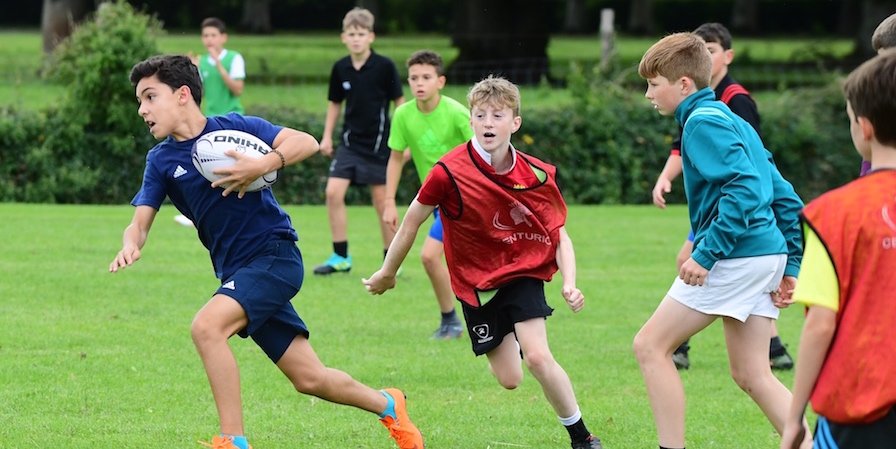 At lunchtime on Tuesday 28th of August the corridors of Clongowes Wood College sj became home to the 205th class in the school’s history. While many of the young men will have felt nervous energy course through them as they drove up the beautiful avenue for the first time, the presence of 20 welcoming house-leaders undoubtedly eased some of those anxieties – or at least the climb up two flights of stairs! The boys and their parents were greeted by Ms Auveen McGrath, Ms Aine Corcoran and Elements Prefect Mr Garry Corcoran as they acquainted themselves with their surroundings which will soon be a home away from home.

In welcoming both the new and returning families to the school community, the Headmaster, Mr Chris Lumb acknowledged the impact of the recently departed class of 2018 and invited them to relish the adventure and journey which they and their boys were about to embark on. In the main body of the school meanwhile, the adventure to which the Headmaster was referring was already in full swing as the boys visited the various locations in the college – rec rooms, sports hall, classrooms, library – places that will now be part of their daily lives.

After Mass, celebrated in the Boys Chapel, and a wonderful meal laid out by the catering department it was time for the boys to part ways with parents and guardians – not quite a goodbye – but merely an auf wiedersehen, where their next meeting was likely to include tales of joy, friendships, the sense of community so closely associated with Clongowes, and most certainly the thrill that being a newly anointed Clongownian brings.

A Week of Firsts

A busy week ensued for the boys with plenty of firsts; first pass of the rugby ball on the VMP, first bomb into the new swimming pool, first experience of moving from class to class, and of course, first meeting with Head of Boarding Mr Frank Kelly who reminded the boys that he is a cuddly teddy bear!

Sunday saw the gathering of the extended Clongowes community in the sports hall for the first School Mass of the year, led by Fr. Rector and Third Line Spiritual Father – Michael Sheil sj. The occasion was a very special one for a number of young men in Rhetoric 2018 who were commissioned as Eucharistic Ministers, accepting the call to administer the Eucharist both in the community of Clongowes and their local parishes. After the celebration the boys laced up their boots and made their way to the afternoon sunshine for our annual Elements tug of war competition, aided and abetted by a selection of Rudiments boys who found themselves outnumbered as Elements got their first taste of Third Line rivalry!

The affair was enjoyed by all with plenty of teamwork, strength and tactical nous on show which will undoubtedly transfer to the rugby arena in due course. Loyola House emerged victorious after some hard fought and evenly contested match ups with Rhetoric 2024 proving a spirited, competitive, bunch on a sunny Sunday afternoon. The boys were gracious in victory and humble in defeat – an encouraging sign of things to come for the group.

Welcome to Clongowes boys and enjoy your stay – May 2024 won’t be long in coming!