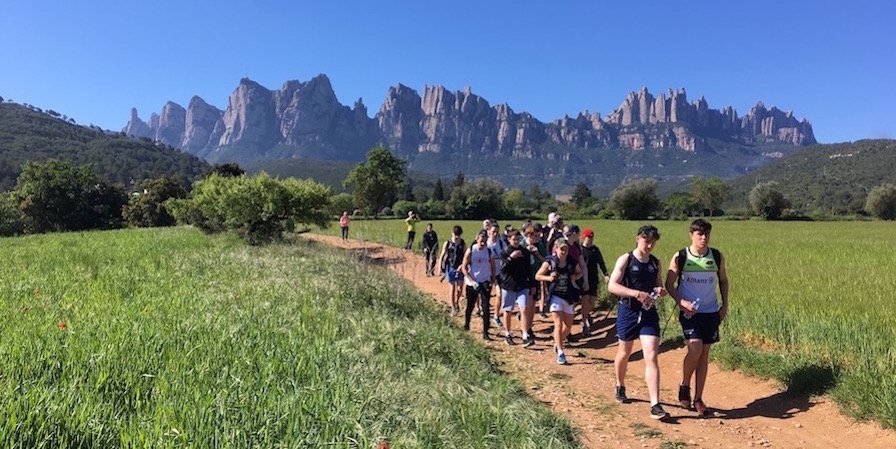 Two weeks ago forty two pilgrims from Clongowes made their ways to the Basque Country in Northern Spain, there to embark on a pilgrimage that would lead them from the birthplace of St Ignatius in Loyola to one of the most important Ignatian sites in Manresa, while also dipping their toes in the Camino de Santiago. Thirty five boys and seven adults (including our Glorious Leader, Mr Lumb) flew to Biarritz on Saturday 28thApril, whence we were taken by coach to our lodgings amongst the low rolling verdant hills that characterise this part of France.

Following a Mass in the picturesque town of St Jean Pied de Port, the formal starting point for the 782km long Camino Francés, the Rector, Fr Sheil led us in the first of a series of reflections, that would be an important part of each day. Mr O’Keeffe invited the boys to dedicate their pilgrimage to a cause of their own before an early night was had by all, as the following day would see us embark on a 25km traverse of the Western Pyrenees that would involve 1,390m of climbing. This proved to be character forming and it was good to see the boys encourage one another on the trail and the looks of achievement and satisfaction on their faces as they arrived at the end. 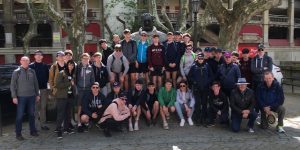 The following day saw us visiting Pamplona, the site of the wounding of Ignatius in 1521, which would lead to his Spiritual Conversion (and without which none of us would have been on pilgrimage together). A tour of the walled city was followed by a visit to Ignatius’ Birthplace in Loyola, where we spent the night.We had a tour of the impressive Counter-Reformation Basilica and also the Holy House, which contains the Chapel of the Conversion where Ignatius decided to dedicate his life to God. There Fr Sheil celebrated an intimate Mass and invited us to take stock of where we were and to be mindful of the journey we would undertake in the coming days.

Over the Hills and Far Away

That journey continued the next day with a six hour bus ride to the medieval, mountain top monastery of Santa Maria de MontserratIt had taken Ignatius considerably longer when he walked there in 1522 to pass a night in vigil before the altar of Our Lady. He observed all the formalities of the ceremony associated with the formation of knights, alternately standing and kneeling, before laying aside his worldly dignities to assume the arms of Christ. Following a ride to the top in a funicular we shared another intimate Mass in a tiny chapel that was one of the highlights of the trip for staff and students alike. 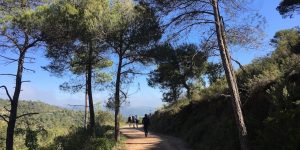 On Wednesday we hiked 24km in the footsteps of Ignatius (and many other medieval pilgrims) to Manresa where he took up residence sleeping rough in a cave on the edge of the town. In the cave Fr Sheil told us how Ignatius had only intended to spend a few days in Manresa but remained for a significant eleven months, during which he composed the Book of the Spiritual Exercises, a guide towards the orientation of one’s life depending upon God, ‘in all things to serve and love’.

The aeterna gave way to the caduca the next day in and around sunny Barcelona, where we spent the morning on two wheels as we followed our leaders from Fat Tire Bike Tours on a rambling, picaresque route along the many cycle paths that adorn the city and impressive seafront. Affairs of state obliged the Headmaster and Rector to leave us after lunch and we suspect that they were reluctant to go.

In the afternoon we paid a visit to the theme park of PortAventura, which is equipped with the very latest heart-stopping, toe-curling, white-knuckle rides. The boys were in their element while the adults kept a watching brief from the safety of the café with the occasional foray into the machinery by Messrs McCormack and O’Hara, Ms Dolan and Charlie Crawford, our antipodean assistant. Tired but happy we returned to base for one last supper after which our Pastoral Co-Ordinator, Ms Dolan led a touching final reflection al fresco on the lawn outside the hotel. 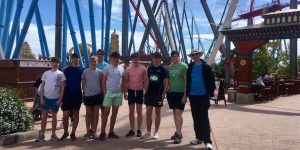 The trip was drawing rapidly to a close the next morning when we visited the Camp Nou, home to Barcelona FC with its comprehensive museum and impressive facilities putting stars in the eyes of some of the round ball devotees in our number. After that the tired but happy pilgrims returned to Ireland, where they made their respective ways home, relishing the still fresh memories of their trip.

The only staff member not mentioned thus far is the redoubtable (and sadly absent) Ms Liz Griffin, without whose Trojan efforts the trip would – literally – not have taken place. Its success is in direct proportion to her preparations in the year preceding the trip and her organisational skills. As we write, Liz is busy putting the starting touches to the next edition of a very successful project that has become a fixture in the Transition Year Ethos Programme after just three years.

They say that the Camino always provides and in this instance it gave us experiences that will not easily be forgotten. Not everyone in Transition Year was able to come on the trip but – to paraphrase,Ms Dolan – everyone who was meant to be there was there. We were all there for a reason – perhaps for someone else – and it may be one that we will never know. The stories are legion, the memories many and the group formed a bond that will stand them in good stead throughout the remainder of their time in Clongowes and beyond.