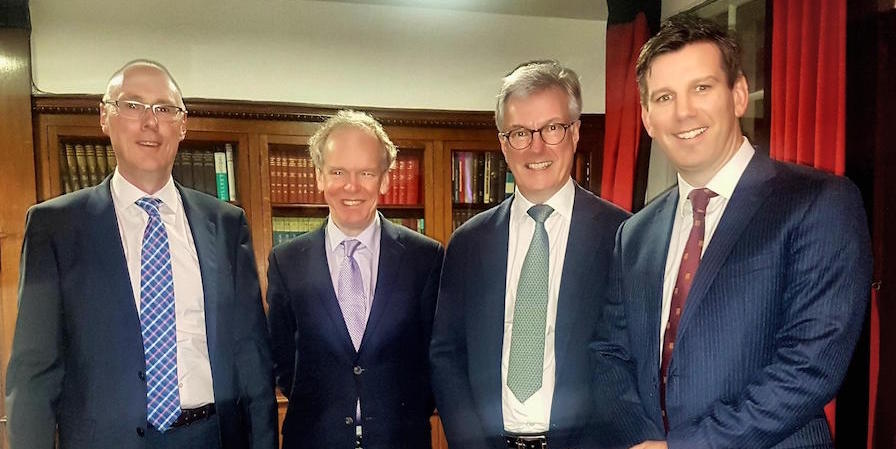 On the evening of Thursday 12thApril, some 50 Old Clongownians as well as a few parents and guests gathered in the Hallam Street Conference centre, near Regent’s Park in London, to hear Professor Peter Neary (OC’67), from Oxford University deliver a talk on ‘Experts, Brexit and the Role of Economic Science’.

Professor Neary is the President of the Royal Economic Society, past President of the European Economic Association and a world renowned, specialist in international trade. Previously he has delivered the 2002 Ohlin Lectures at the Stockholm School of Economics, the 2008-2009 Graham Lecture at Princeton University and the 2015 Corden lecture at the University of Melbourne.

Described by one of the attendees as ‘humble, humorous and intelligent’, Professor Neary introduced us (or re-introduced in the case of some), to the theories of Ricardo and the facts supporting international trading patterns. The facts support Ricardo’s original insights and not some of the assertions of the more vociferous voices supporting Brexit. Enough has been said already to indicate that the question and answer session was a lively one. Using the analogy of a doctor, Peter was keen to point out that while experts (economists), cannot forecast the future they should be consulted in their field of expertise.

Jointly hosted by the Clongowes Foundation and the Clongowes Union and attended by the Headmaster Mr Chris Lumb, the evening brought together past pupils from 1960 to 2011. Clongowes was delighted to welcome the Reverend Dominick Robinson SJ, the Superior of Farm Street as a guest. It was a wonderful evening and both the Union and the Foundation would like to thank Professor Neary for giving of his time and intellect and Dermot Waldron (OC’78), for generously sponsoring the event.