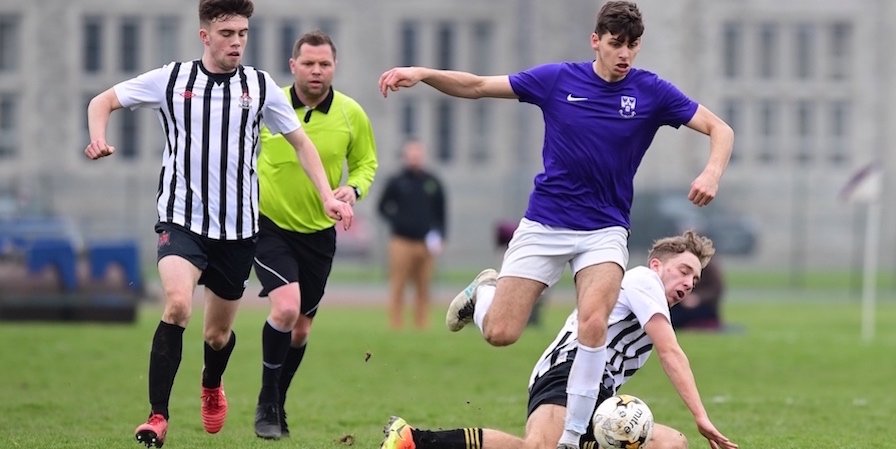 Last Wednesday reigning champions Belvedere College retained the Joe McGrath Shield after a keenly contested final on a bitingly cold mid-April afternoon. Having defeated last year’s finalist Blackrock College in a penalty shoot-out at the semi-final stage, Noel Mason’s team was hoping to take two steps forward, but had to settle for one. Erstwhile Senior Soccer Coach, current Deputy Headmaster and all round football man, Mr Martin Wallace takes up the tale of thwarted ambition in the beautiful game…

Belvedere were strong favourites for the final but the early exchanges were dominated by Clongowes and the visitors decision to play five at the back revealed an awareness of the potential in our team. An early free kick to Clongowes led to a sequence of corners that put the Belvedere defence under great pressure, yet their goalkeeper did not have to make a meaningful save. This is a testament to the doughty defenders in black and white, who had a significant height and bulk advantage over our relatively slight forward line of Eric Sholarin and Max Rowan.

Although Clongowes dominated possession in the first quarter of the game, Belvedere had more guile in their use of the ball, leading to more effective attacking play and a number of fine saves from our goalkeeper Ben Mathuscka, who was one of our stars on the day.And yet, it was something of a surprise when Belvedere scored the first goal after half an hour. A finely-floated free into the box was met by one of the trees in a forest of heads and it landed in the corner of the net as much to the surprise of the attacking team as to the defenders, who had held a good line. 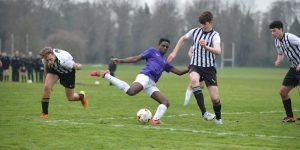 Belvedere took over for the remainder of the half, which would be their only period of domination in the game. Buoyed by their lead, they played some fine flowing football, making very good use of the wings to stretch our defence, while our boys struggled to regain a foothold. We managed to create a few chances with Eric Sholarin shaving the post and Paddy Culhane’s shot coming off the crossbar. Belvedere’s second goal shortly before half-time was a thing of beauty, resulting from a well-constructed attack that began in their own defence, moving the ball through the channels before bisecting our defence with a very effective delivery to the net. It looked at this stage that the second half might be a slow and excruciating coronation.

Au contraire, as they say in Kilgarvan, as our lads took control of the second half and scored an early goal. Fittingly, it was Paddy Culhane, our most effective attacking player (but sadly frustrated by a poor supply of ball) who passed the ball deftly to the corner of the net after a well-worked attack on the right wing. Paddy worked tirelessly throughout the game, making run after run, but not getting supply from a midfield that was being put under considerable pressure. When he was given one good ball, he scored with it.

Suddenly we were all over them. Karl Von Finckenstein had been Clongowes best player in the first half, but he was the best player on either team in the second, delivering a master class of skill, leadership and aggression. Aided by Dan Reilly, who also had a fine game as a defensive midfielder, and Colm Murphy, who showed a lot of delicate skills for such a tall lad, our midfield began to control the match. Our dominance in midfield was strengthened further by the substitution that saw Sean Lysaght come into defence, allowing Michael Medeiros, our captain and best defender, move into his customary position at midfield. 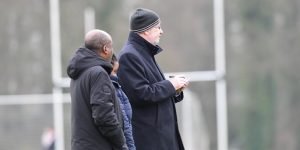 A flurry of corners and goalmouth scrambles in the Belvedere defence convinced those watching that it was only a matter of time before we scored the equaliser. Their goalkeeper, underemployed in the first half, was now working double time to keep Clongowes at bay. Just as we were pondering the implications of an equaliser, extra-time, possibly another penalty shoot-out, Belvedere broke out of their besieged box, the ball ping-ponged into the lap of their winger who lobbed in a speculative cross to no one in particular that freakishly bobbled and spun off Ben’s hand and trickled over the goal line.

This goal, which effectively finished the game as a contest, was even more against the run of play than their first. That said, it would be wrong to deny that Belvedere were worthy winners of the Shield. While our boys dominated possession over the course of the game, goals win games, and we simply did not have the penetration that they had.

Congratulations to Belvedere on winning the competition two years in a row! Commiserations to Noel Mason and his assistant coach Liam McAuley, but also congratulations on bringing their team to this level of performance against much larger schools where the boys are playing league soccer on a regular basis from an early age! And finally, congratulations to the squad for representing the school so admirably over the season and in the final! 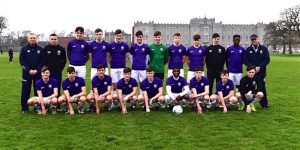