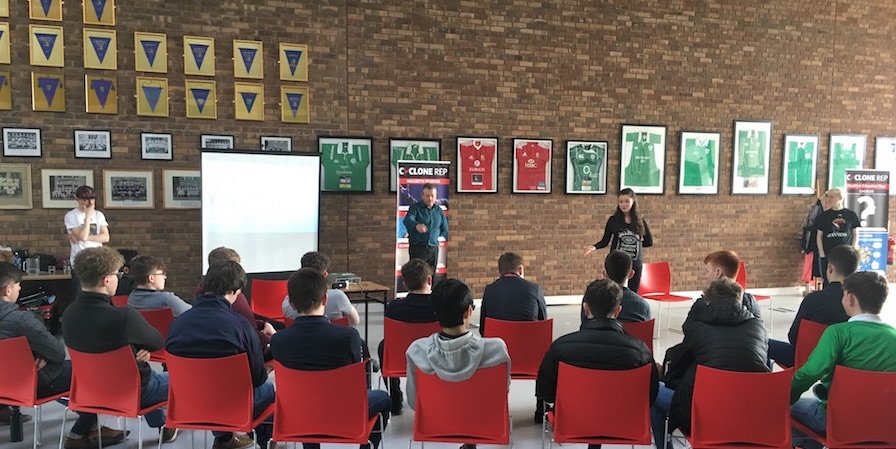 No need to panic or run for cover, this is not an early stage of the anticipated ‘Beast from the East’ (Storm Emma), expected next week – it’s just the return of our old friends from the Cork based Cyclone Repertory company who have returned to Clongowes to entertain the Transition Year boys while also educating them in the dangers associated with alcohol.

Cyclone Rep have previously been to Clongowes to perform Othello and The Merchant of Venice as well as their acclaimed Bullying Prevention Session. Today they performed Choices, a play and presentation for secondary school students about the negative impact of alcohol.

Written and directed by Dr. Peadar Donohoe Choices is concerned with the dangerous decisions that young people can make around alcohol. In the play Billy, Vikki and Oisin play a drinking game where Billy poisons himself with vodka and collapses into a coma. In this limbo state Billy meets Dr. Casey, a quirky positive psychology scientist, who shows Billy, through a dramatic and comic inquiry, how his ‘choice’ to drink has been influenced by friends, family and media.

At the end of the inquiry Billy is asked to choose a future he wants: is it one that is riddled with pain from excessive drinking or one where he embraces his life joyfully and happily?

In the presentation section current research on the negative impact of drinking was shared combined with open questions to involve students in discussion. Choices is not only about the choice to drink harmfully or not, but also choices about: