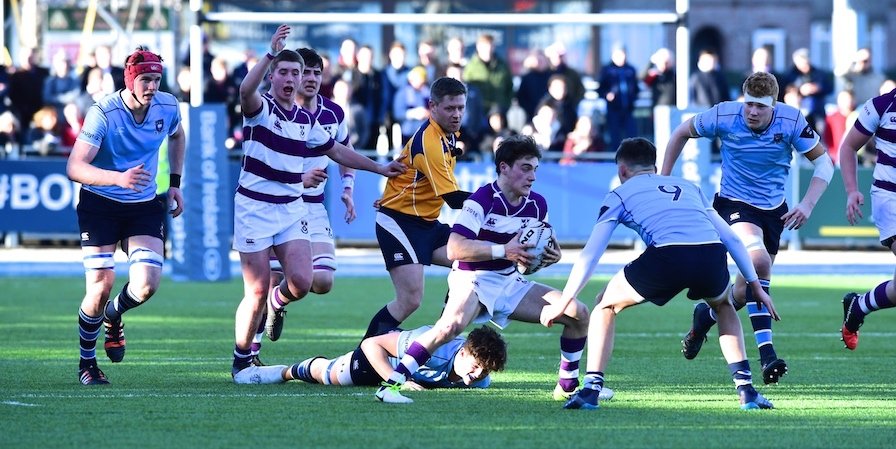 It seems a long time ago now since Rory Delap addressed the school at Morning Prayer on the first day of spring as the Senior Team prepared to face old rivals, King’s Hospital, in their first senior cup match. Rory exhorted the boys to give of their best on the day and quoted Rudyard Kipling’s poem ‘If’ as a rallying cry. Yesterday, in their second match, the team faced newer rivals St Michael’s in Donnybrook, where they met with neither triumph nor disaster as they acquitted themselves very well and went down fighting until the final whistle blew…

They didn’t let us down. They never do and they didn’t today, even though the victory so dearly sought in the pursuit of the sweetest of cups was not to be theirs. As the game wore on and looked to be getting away from them, they contrived to ‘force their hearts and nerves and sinews to serve their turn long after they were gone’. They fought the good fight but, in the end, were forced to give best to a fine St Michael’s team that may go a long way in this competition, and defeat in such circumstances is never a disgrace.

It was Clongowes, who started the brighter and came away from a residency in St Michael’s territory with a 3-0 lead following a sweetly struck penalty courtesy of centre (and vice-captain) Ben O’Shea. However that initial advantage was quickly wiped out when the local school touched down twice in little more than ten minutes and converted once to leave them 12-3 ahead. Clongowes dug deep and O’Shea added another three points (12-6) before a dangerous break by scrum half, Conrad Daly (above), that sadly came to naught as the interval approached.

The first score of the second period would be vital and unfortunately it fell to St Michael’s with a converted try early in the half (19-6). A penalty in the 42nd minute extended their lead and demanded a quick response from Clongowes. O’Shea was unlucky to be adjudged off side ahead of out half David Wilkinson’s kick and a try was denied but they bounced back when totemic number eight, Matthew Martin, finished off a good move involving O’Shea and the always dangerous wing, John Maher in the 56th minute. The vice captain added the points for 22-13 but time was running out and further scores were denied the men from Clongowes before the final whistle.

And so a season that commenced as much in expectation as in hope came to an abrupt halt a month earlier than we would have liked. But all hope should not be lost as many of these young men will be back in action next year and will have learned much from their experiences throughout the season. Kudos must go to the coaches and to the enormous collective effort by the fifteen starting players and six subs who gave their all on the Donnybrook turf today and never – ever – said die.

They didn’t let us down. They never do