There was a moment early in the second half of the Junior Cup match in Donnybrook this afternoon when we wondered whether things would indeed go according to the coaches’ best laid plans or whether the boys from Temple Carrig would upset our apple cart. From a standing start at 7-0 down early on, the Greystones school had posted 12 unanswered points to take the lead, with a try following an overlap on the left wing followed by a touchline conversion and they were looking menacing.

We needn’t have worried: when the going got tough, the tough young (some very young) men from Clongowes dug in and did what was needed to grind out a victory. As we observed last week when previewing the twin cup campaigns, we knew that they would not let us down – they never do – and, just like their senior colleagues against The King’s Hospital last week, they advanced into the next round of the competition.

Clongowes had started the brighter with an early try beside the posts from centre Rory Morrin (below) following good teamwork and a snappy delivery from skipper, Charlie Reilly. Oisin Devitt added the conversion but the Wicklow team (with some fine footballers throughout) struck back with an effort of their own from centre Sean Lloyd to leave the score at 7-5 and it was game on.

Clongowes continued to have much of the possession throughout the half and lived in the opposition ‘22’ as the interval approached but failed to trouble the scorekeeper again before half time. This might have proved costly as Temple Carrig moved the ball wide on the left and Lloyd got in at the corner at the Wesley end of the ground to set up a tricky conversion that was skillfully goaled by outhalf Thade Shanahan to leave Clongowes on the wrong end of the scoreline.

Cometh the hour; cometh the men.

Clongowes gradually worked their way back into the contest with a lot of play on the left of the pitch directly under their enthusiastic supporters in full voice. Twice, substitute winger Derick Sholarin (below) sped down the left wing only to be held up short – but the blood was up. However cool heads were needed at this juncture and they were to be found in the lineout with a well-worked move straight from the training paddock that saw tight head Barry D’Arcy squeeze over to level the scores.

The difficult conversion was just wide but the remarkably composed Oisín Devitt made amends twice with penalties wrung out of the defence’s inabilty to cope with pressure at lineout and scrum alike. The game ended with Temple Carrig in possession on their own 5 metre line with no option but to run the ball as a converted try was needed. Stanger things have happened (witness John Maher’s match winning effort in 2016) but thankfully not yesterday.

NEXT ROUND: Clongowes V Belvedere: Monday 26th February at 3:00 pm in Donnybrook 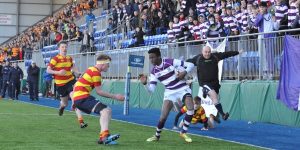 Information for Past Pupils