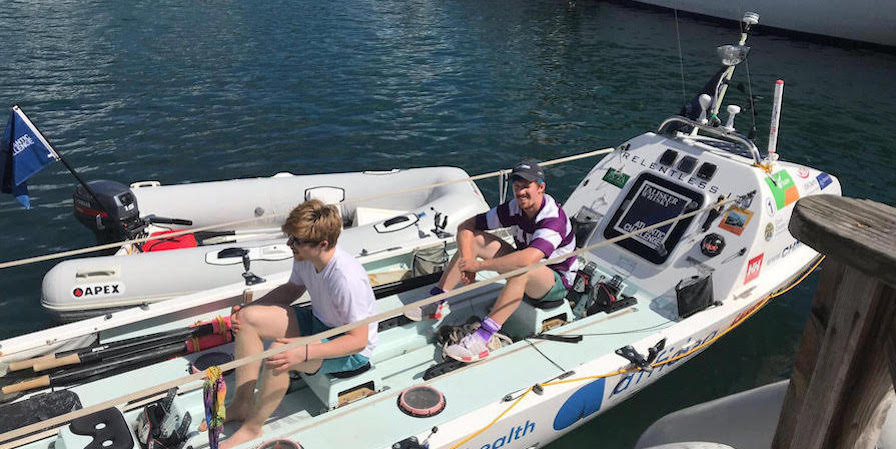 Christmas Day At Sea: Capsizing, And Rowing The Atlantic

Congratulations to Old Clongownian and School Captain Tommy Browne (2010) and the ‘Relentless Rowers’, who have just finished rowing 5,000km across the Atlantic Ocean, setting an Irish record and raising some much needed funds for the Childrens’ Unit in Cork University Hospital in the process. Tommy’s ‘very happy and relieved mother’, Nicky takes up the tale…

od, after reading a book about the race and, having found three willing participants for the undertaking, the plan came together. Sean was a schoolmate of Eoin O’Farrell’s, and the pair had a certain degree of rowing experience. Pat O’Connor and Tommy were complete novices. Needless to say, the Talisker Whiskey Atlantic Challenge is not for the faint-hearted. The annual race saw 32 boats take part this year, departing the Canary Islands on December 14th and four didn’t make it across.

The four-man effort saw the rowers taking it in shifts aboard their trusty craft, Saoirse. In teams of two, they would row for two hours, before taking two hours off, to allow for sleeping, washing and eating. The boat itself has two cabins for sleeping and storage. Food was far from Michelin Star quality, with 80% of their diet consisting of freeze-dried food, 1000-calorie meals that need water to be added to them. “Some of it was tasty and some of it was… not the nicest!

20 foot waves, 45 knot winds, collision with a whale, strikes by flying fish, chronic sea-sickness, a boat’s battery going on fire, a medical emergency with diabetes, and vessels capsizing were just some of the obstacles which faced those in the race. Ireland’s ‘Relentless Rowers’ certainly had hiccups of their own along the way – like the night a rogue wave hit them. Eoin and Sean were inside in the cabin, while Pat and Tommy were on deck and both lads were thrown overboard. Nothing daunted they pulled themselves back on board by the harness, set about securing the boat and continued to row.

It took about a minute for the boat to come back around. Luckily our cabins were shut. If those cabins were open, it would have filled up with water and wouldn’t have come around. We’re just thankful that we made it across safely, because it was rough and the sea wasn’t the kindest to us.

Celebrating Christmas and ringing in the New Year at sea was a strange experience for the crew, but a satisfying one nonetheless. A satellite phone gave them an aggregate of 20 minutes of contact with home, and the emotional support was key in getting them across the water. The crew arrived to English Harbour amid shouts of joy, fanfare, flares and a resounding rendition of ‘Ireland’s Call’ with Tommy proudly wearing his Clongowes rugby socks.

The ‘Relentless Rowers’ were one of five crews to break the world record of 35 days as well as setting a new Irish record by making it to Antigua from La Gomera, a Canary Island, in 32 days and 22 hours. To date they have raised €25,521 for the Childrens’ Unit in Cork University Hospital (click here).