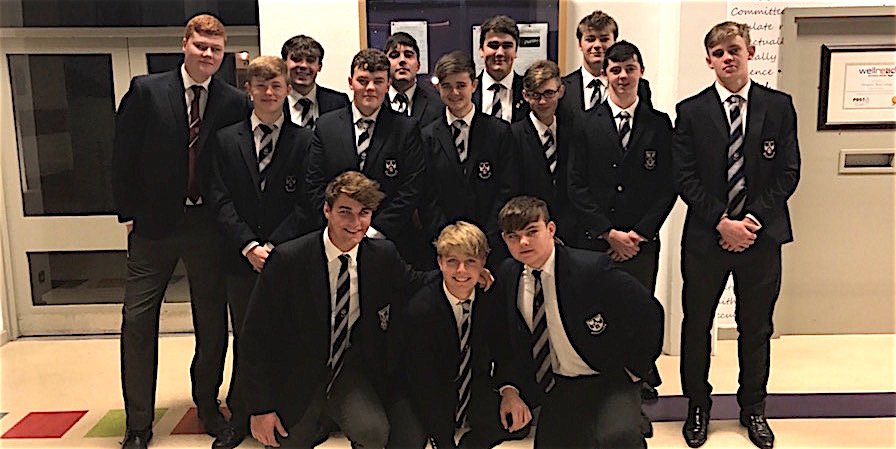 Just before Christmas (Wednesday, 6th December) fifteen 5th Year students attended the John Paul Second awards ceremony in St Peter and Paul’s church in Portlaoise. The Pope John Paul II Award encourages participants to take an active part in the life of their Church: in the life of their community and society. It enables young people become more aware of the teaching and role of the Catholic Church in the world and to engage at a deeper level with Christ.

The award was created to commemorate the late Pope John Paul II who was so committed to young people and who had such belief and confidence in them. The candidates participated in a number of roles throughout 4th year to receive their respective awards. Social aspects included Age Action, Special Olympics, and Trad for Trocaire event nights. On the parish side of things, members of Schola were particularly well set, but volunteering to read and Mass set up were also good ways to complete the award.

On the night itself, Ms Anne Marie Dolan and Ms Eileen Lumb as well as some of our parents accompanied us to Portlaoise, where more than 300 students from across the Kildare and Leighlin diocese were also receiving awards. Award Coordinator Ms Caitríona Kelly spoke about the importance of the John Paul II award and thanked us sincerely for our commitment over the past year. Bishop Denis Nulty also spoke, and presented us with our beautiful award medals.

The John Paul II Award is an excellent innovation, which allows Transition Year (TY) students to really make the most of their year. We can honestly say that we’ve learned a lot from our experiences and would highly recommend the award to any TY Student who wishes to broaden their horizons and really give something back during Transition Year.

Missing from the picture, Robbie Savage.

‘Trust Christ; listen attentively to his teachings; fix your eyes on his face; persevere in listening to his Word. Allow him to focus your search and your aspirations, all your ideas and the desires of your heart’. – St. John Paul II.