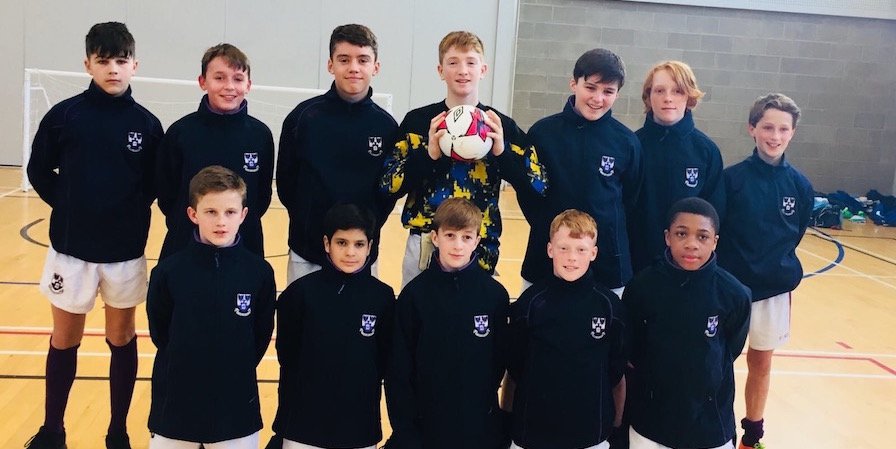 With origins in 1930’s Uruguay, ‘futebol de salão’ or Futsal is becoming increasingly popular in Ireland; for Clongowes it was a new venture into this South American footballing style…

The 2017 FAI Post Primary Schools Futsal is a national competition, with regional blitzes, leading to regional winners to progress to provincial and then national finals. Futsal is played between two teams of five players each, one of whom is the goalkeeper. Unlimited substitutions are permitted and – unlike some other forms of indoor football – the game is played on a hard court surface delimited by lines; walls or boards are not used. Futsal is also played with a smaller, harder ball. The surface, ball, and rules create an emphasis on improvisation, creativity, and technique as well as ball control and passing in small spaces. Unlike football there is no offside rule so attackers can get much closer to goal than in the traditional game so a good long pass is often the quickest route.

Last Thursday (9th November) Clongowes played in the Kildare Regional blitz and topped their group unbeaten after four victories to play in the Kildare Final against the highly regarded St Paul’s Monasterevin. One training session, where we worked on touch, the weight of the pass and a futsal shape, served us well. We knew to play the game at a high pace and quick transitions to offence meant our goal tally was impressive as the day went on. 29 goals scored by 9 of our 11 outfield players is a terrific reflection on the contribution of the whole squad. Alex Kelly was significant in goals throughout with only seven goals making it through our defence.

In the final, nerves led to an edgy start which settled once we had netted our first goal courtesy of Leo McCann. St Paul’s got one back but then Matthew Hanly was subbed in, and had an immediate impact, scoring on his second touch, then delivering for our third from Oisin Hussami. Matthew was to score three more times, with Tom Murtagh delivering the final blow for the match to finish 7-3.

The boys from Elements (who learned about futsal watching YouTube clips that Ms Nolan had sent on to them) will now go on to represent Kildare in the Leinster Finals in the National Indoor Arena at the National Sports Campus on 21st November.