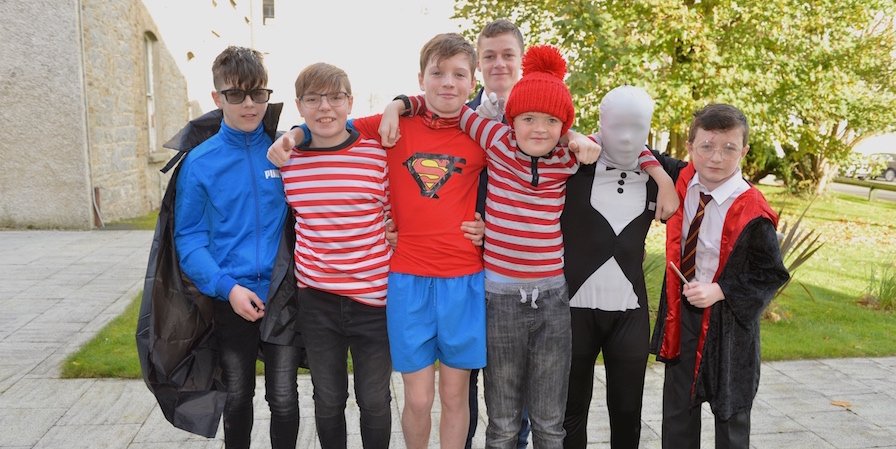 Our Inter-House approach to Book Character Dress-Up Day resulted in the best event of its kind to date. Classic and modern characters from the world of books added colour to corridors and classes. House Leaders selected a book character for their Houses. A competitive angle was introduced with Houses earning points per student participating. This resulted in much creativity, some well thought out and planned in advance while others more desperate but willing! It was this willingness that created great buzz and energy about the school on a cold November day.

Arrupe won the House Competition dressed as Greg or The Wimpy Kid (Jeff Kinney’s Diary of A Wimpy Kid). The win was not without light-hearted controversy. ‘Too easy!’ the competitors shouted. They were right but one could say that was good strategy on the parts of House Leaders, Michael Colivet and Ben Matuschka. White t-shirts, black shorts and a black back-pack are easily scrambled together so greater involvement and higher point score. Arrupe won a pizza night!

Extra fun came from staff who dressed up and willingly walked the gauntlet to classrooms and even meetings before the judging by House Leaders for best dressed. The prize, presented for nerve rather than creativity went to Mr Marron coming from ‘infinity…and beyond’ as Mr Buzz Lightyear (okay, not strictly a book character, but there have been Toy Story books since the film, so he qualifies!)

Truly, everyone who participated was a winner as their sense of fun and energy created a great atmosphere for the whole school. A new age of Book Character Dress-up Day has been launched. Next year will be even better. Thanks to all who participated.

Extra thanks to Dave Nelson for taking the photos for the Clongowes Archives, it wasn’t an easy assignment this morning with so many bodies gathered.

VIDEO FOOTAGE FROM THE DAY HERE