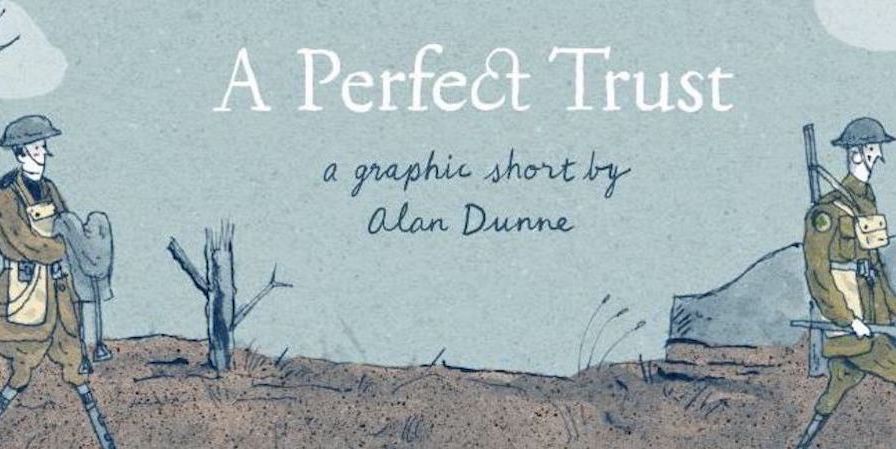 An exhibition on Fr Willie Doyle SJ is taking place at Dalkey Library, Dublin from Tuesday, 18th July until Friday, 18th August 2017. Fr Doyle was a Jesuit who taught in Clongowes at the turn of the 19th century, when he also founded and edited ‘The Clongownian’. The exhibition by Irish Jesuit Archives, which was launched by Province Archivist Fr Fergus O’Donoghue SJ, also features a graphic short on display panels by illustrator Alan Dunne entitled, ‘A Perfect Trust’.

William Joseph Gabriel Doyle was born on 3rd March 1873 at Melrose, Dalkey Avenue, Dalkey, County Dublin. Known as Willie, he was the youngest of seven children of Hugh Doyle, registrar of the insolvency court, and Christine Doyle (née Byrne). Educated at Ratcliffe College, Leicestershire, in 1891 Willie followed his older brother Charles into the Society of Jesus (Jesuits).

Willie taught at Clongowes Wood College, where he produced The Mikado and founded the school journal, The Clongownian. His Jesuit formation included periods in Belgium and England, and further teaching at Clongowes and Belvedere Colleges. After ordination at Milltown Park on 28th July 1907, Willie began work as an urban missionary and retreat giver in Ireland. His positive attitude made him a great success, and he travelled all around the British Isles. He was also the author of best-selling pamphlets on retreats and vocations.

Volunteering as a military chaplain in the First World War, Fr Doyle was sent to France with the Royal Irish Fusiliers in early 1916. Within days of his arrival at the Front, he showed himself outstanding in the work of a chaplain. Present at the battles of the Somme and Messines, Fr Doyle was killed during the third battle of Ypres on 16th August 1917, while going to the aid of a wounded man near Frezenberg. He is commemorated on the Tyne Cot memorial, Belgium. Fr Doyle was awarded the Military Cross, and put forward for the Victoria Cross posthumously but did not receive it.

Writing to Willie’s father, Hugh, in December 1917, Major General WB Hickie remarks that: ‘I could not say too much about your son. He was loved and reverenced by us all. His gallantry, self sacrifice and devotion to duty were all so well known and recognized. I think that his was the most wonderful character that I have ever known.’

Damien Burke, Archivist, Irish Jesuit Archives (and author of the above) will give a lecture on Fr Doyle at Dalkey Library, Dublin on Tuesday, 15 August 2017 at 6.30.pm.