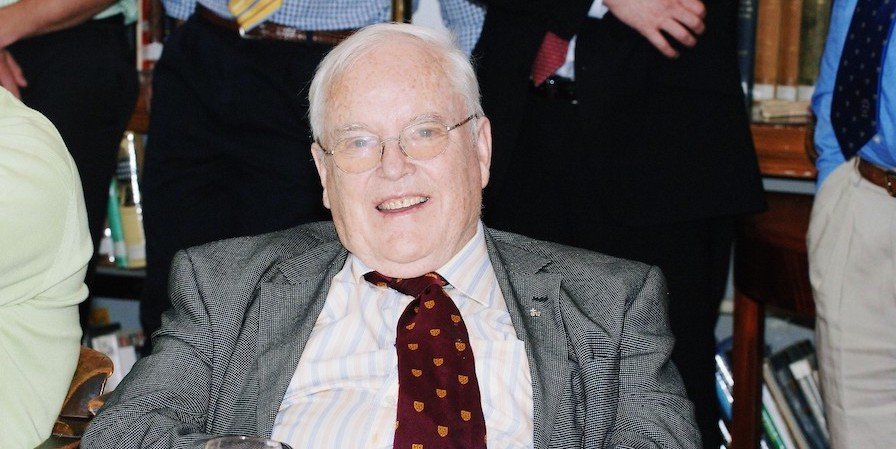 Paddy Crowe SJ died peacefully in the early hours of Tuesday morning, 4th July, at Cherryfield Lodge in Dublin. He reposed at Cherryfield Lodge 14.00 with prayers at 16.00 on Wednesday 5th July. His funeral Mass was celebrated in the old Milltown Park Chapel at 11.00 on Thursday 6th July followed by his burial in the Community Graveyard at Clongowes.

We are indebted to the Irish Jesuit Website, jesuit.ie for the following appreciation:

Born on 5th March 1925 in Edenderry, Co Offaly, Paddy was the oldest boy in a large family. He was educated at Clongowes Wood College SJ in Co Kildare before entering the Society of Jesus in 1943. Early on, it was thought he would make a good professor of philosophy but he had a more active interest in schools. He soon found himself working in education under various roles.

At Clongowes Wood College, he became teacher, prefect, rector, and headmaster. Referring to the school, he said: ‘We think Clongowes is a good school and to it we are willing to give our time, our energy, our humanity, our life’. He served as Director of Education Policy and Education Delegate for the Irish Province and worked at several other schools including Crescent College and Mungret College in Co Limerick, and Belvedere College, Gonzaga College, and Greendale School in Dublin.

Paddy facilitated dialogue between Jesuit and Lay teachers which included talk about their shared aspirations. Referring to his personality, Fr Bradley said: ‘He was an extrovert and had such a sense of humour. He was bravely adventurous, who loved to travel, have new experiences and make new friends’.

‘Educational value,’ Paddy said once, ‘is based largely on personal contact of good people with the young.’ Fr Bradley, who worked with him for many years, noted: ‘In all the schools where he served, he was demanding and firm, but fair. He lived in the continual tension between the old and the new, always reading, questioning, and seeking to move on’. One of his former students commented: ‘You always knew where you stood with Fr Crowe’.

Paddy was consultant to Fényi Gyula Jesuit High School, the only Jesuit school in Hungary, founded in 1994. He was heavily involved in the University of Scranton (USA) Scholarship Scheme, which led in time to his honorary doctorate in education, of which he was justly proud. Later from 1998 to 2009, he returned to Clongowes where he lived among his Jesuit community, acted as Spiritual Father for students, assisted in a local parish and ministered to the Holy Family Sisters. His mind remained very alert as his physical health deteriorated, and he then moved to Cherryfield Nursing Home in Dublin. Fr Bradley spoke of Paddy’s ‘long years of decline’ and his ‘painful letting go of control.’ He also struggled to pray and to find rest in prayer. However, he came to accept his mission of praying for the Church and Society.

Paddy had a great interest in computers and used to order online by himself latest model after latest model while living in Cherryfield. Another friend said of his time there: ‘He was a great man to have a conversation with but a terrible man to play scrabble with’.

He is deeply regretted by his family, Jesuit companions, friends, former colleagues and many students. Fr Bradley concluded: ‘As Paddy arrives at last at the father’s house, we can rejoice with him and for him.