Ready for the Next Phase - Clongowes Wood College

Ready for the Next Phase

Home / News / Clongowes Stories / Ready for the Next Phase 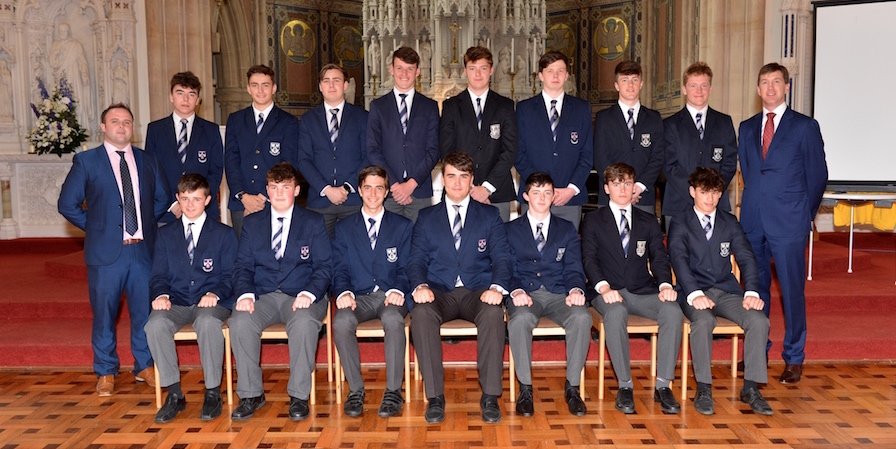 Last Monday the gentlemen of Syntax spent the day in Glendalough on their Annual Retreat, where they reflected on what has been a jam-packed Year of Transition for them. The next day, after their cubicles were cleared and bags packed they and their families assembled in the Boys’ Chapel for their Graduation Ceremony…

As the Syntax boys and their parents assembled in the Boys’ Chapel they were greeted by a panoply of photographs assembled by Thristian Hylle that attempted to contain and display the events of this many splendoured year. The Opening Prayer was given by our Pastoral Co-ordinator, Ms Anne Marie Dolan before MC and TY Coordinator, Mr Paul McCormack, introduced the programme of events and the Clongowes Trad Group accompanied by Ms. Catherine Heslin then set our toes tapping with lively renditions of ‘Hartigan’s Jig and The Haunted House’ followed by the ‘Humours of Ballyconnell and The New Mown meadow’.

The Headmaster had really bonded with this group, especially when he accompanied them on the Ignatian Camino Pilgrimage earlier in the month and again on their Retreat in Glendalough. Mr Lumb spoke warmly of the Transition Year, which is a jewel in the Clongowes crown, and congratulated all involved, students and staff alike for making it such a success. He was followed by Year Captain, Hugo O’Donnell, who spoke about Transition Year being ‘a year of change and movement, both physically and metaphorically’ as well as being ‘a smorgasbord of activities and opportunities which ensured that, quite literally, there was never a dull moment’.

After Mr John O’Donoghue had presented the Gaisce Awards we were treated to a range of presentations from a variety of students on their experiences throughout this exceptional year:

There was also a delightful piece of jazz improvisation performed by Conor Martin on the piano. Other certificates were awarded for Lifesaving, Tech Create, Cookery and Kayaking (Level 2).

Tim O’Brien received an award for outstanding contribution to Social Outreach while Hugo O’Donnell was presented with a Growth in Leadership Award. Recognition was also given to the boys who are working towards the John Paul II Awards (to be presented early in 2018) and this was followed by the presentation of the boys’ Junior Certificates and Transition Year Certificates

Following this Ms Mary Power, mother of Thomas, made presentations to Ms Patti Beirne and her husband Michael (parents of Micheál) and to Steven Gray and John O Donoghue in gratitude for their contribution to the parents’ BBQ on Union Day.

There followed a fond farewell to the group by Lower Line Prefect Mr Steven Gray, who congratulated the boys for all their hard work and various contributions throughout a year that has been an opportunity to make new friendships and to deepen those that already shared. He remarked that ‘it is the little things as much as the big that will be remembered Catching up on news in the dormitory after breaks, the quips during debates and the kind words after a tough day on the pitch… We look forward to following your progress next year as you enter the Senior Cycle confident that you will be able to meet the challenges that the coming years will bring’.

The Closing Prayer was led by the rector, Fr Michael Sheil, SJ before Hugo O’Donnell brought proceedings to a close with a powerful rendition of ‘Only in God’. Earlier Hugo’s address on behalf of the students had concluded with the following words, which we are unable to better as a summary of this extraordinary year that does so much to help the Syntax boys develop as they bridge the gap between the Lower and Higher Lines in Clongowes. Take it away Hugo!

‘At some point, either in Elements or during the intervening years, we each joined the school as an individual. As we draw the curtain on Transition Year and Higher Line beckons to us, we do so as a solid group of friends – champions of each other on the good days and supporters during the more challenging times. We are inextricably bound by our shared experiences and the unique connection forged by living this Clongowes life together. We’ve got each other’s backs – we’re ready for the next phase – bring it on!’

Pictured above are the Transition Year Award Winners: