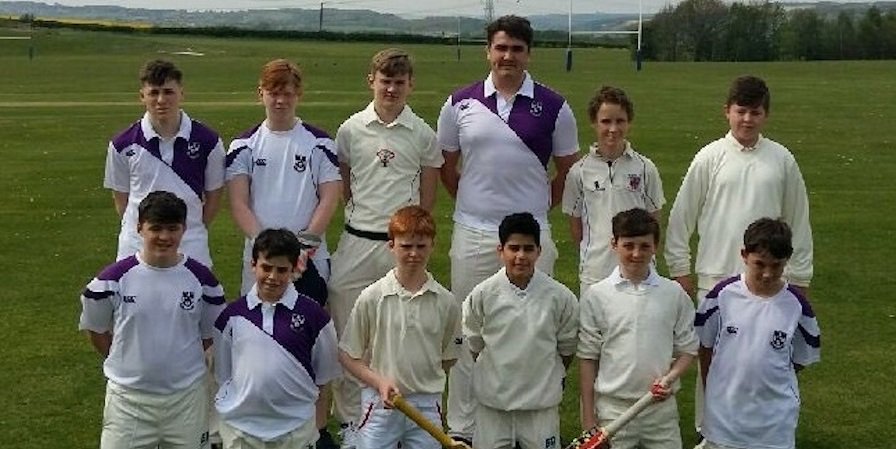 On the May Bank Holiday Weekend a group of cricketers from Clongowes accompanied by Fr. Michael Sheil SJ, Tom Carroll, Joe Flannery and Niall Black journeyed to Mount St. Mary’s School, Spinkhill, Derbyshire to play two matches. This was a mixed aged group team from first year to transition year. The boys settled in on Saturday afternoon and had a fielding session on Mount St. Mary’s fine ground. We were advised by their Headmaster that the level we were playing had won away at Stonyhurst that afternoon…

Sunday was bright and sunny and the boys took advantage to have a 90-minute session in Mount St. Mary’s four lane outdoor net complex. The first match followed in the afternoon on a grass wicket, which was a new experience for many of the Clongowes lads – as was the sight of the heavy mechanical roller. Clongowes won the toss and batted, their total of 114 for 5 off 20 overs looking a little bit shy after the loss of Stephen Black (Phoenix CC) for 45 and Hugo O’Donnell (Merrion CC) for 15 in successive balls.

A tight run chase followed in which our bowling exceeded expectations, but sadly the fielding – both catching and ground fielding – was below par. Mount St. Mary’s main man (part of the Derbyshire Under 15 set up) was dropped three times on his way to 70 odd not out and they triumphed by 8 wickets with 3 balls to spare.

The next morning a tired bunch put the effort in at a sharp fielding session in the drizzle. By match time it was warm and sunny again and this time Clongowes was inserted to bat. The outfield was a little bit slower and the wicket a little bit more variable and a total of 118 for 6 looked good against what on paper was a slightly stronger Mount St. Mary’s XI. Stephen Black 63 was well backed up by Waterford’s William Stokes and Castlebar’s finest Sean O’Grady. Leo Dowling (Merrion CC) produced the shot of the day with a beautiful on drive for four.

The brains trust had done a little homework overnight. Mount St. Mary’s main run getter was tied down for 2 or 3 overs and eventually lost patience against O’Donnell’s well directed spin and was safely pouched at mid off by James Ward of Westport (grandson of Eugene Ward of Phoenix fame). Clongowes then ran out comfortable winners by 40 odd runs with tight bowling from Black, Dowling, Stokes and left arm seamer Patrick Martin (another with Mayo connections!).

Mount St. Mary’s coach and former first class cricketer Lesroy Weekes (great grandson of the famous Everton) then took time to speak to our boys at the end of the two matches. All in all a successful trip was had in that the boys learnt a lot about cricket and were also competitive on the pitch. We would like to thank Mount St. Mary’s for hosting us and hopefully a similar tour can be repeated in the future.

Courtesy of Cricket Leinster, the official website of the Leinster Cricket Union