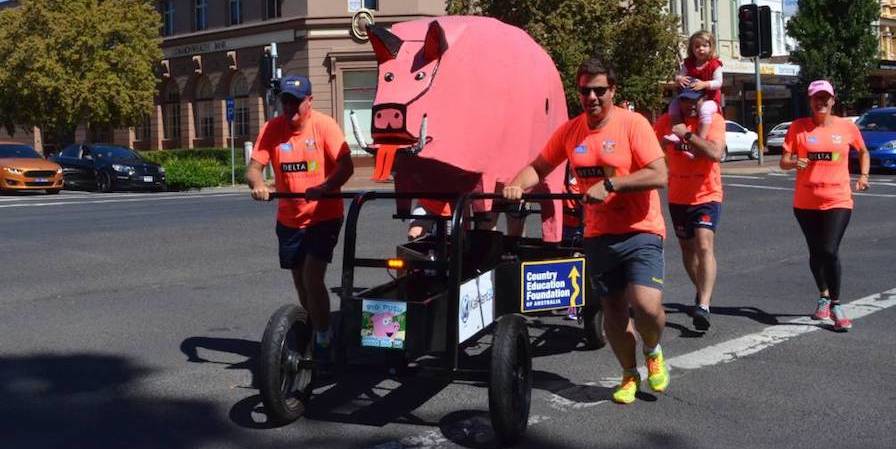 Ducks can fly, but pigs…?

The Clongowes Duck has migrated and mutated into a pig in New South Wales (NSW), courtesy of Richard Fleming (OC’06) and Justin Fleming (no relation), who visited Clongowes in 2004 as a GAP Exchange student. Richard (on the right) and Justin (on the left) decided to apply the successful Clongowes Duck Push model to raise some $60,000 for the Country Education Foundation Australia.

The 1.5m high pig, which has a fighting weight of 250kg, was helped on its way from Boorowa to Orange in Central West NSW in April by a rag tag bunch of farmers, footballers, locals and business owners over the six days that it took to complete the 230km route. The porker was designed and built by local engineering firms, before local schoolchildren took care of clothing him in papier–mâché and applying his distinctive pink body paint.

Richie readily acknowledged their debt to Clongowes’ very own Duck Push, which both Flemings took part in during his Transition Year. ‘We knew it was a crazy idea and it would attract the attention it deserves, but even so it has exceeded our expectations for how well Percy has been welcomed,’ he said. Like the Clongowes event the push is for a good cause as the Country Education Foundation provides grants and assistance to disadvantaged rural and regional students giving them access to further education, training and careers.

Percy is now resting on his laurels for a few months but Richie is considering entering him for the City2Surf in Sydney later in the year. For more on the porcine pilgrimage click here.