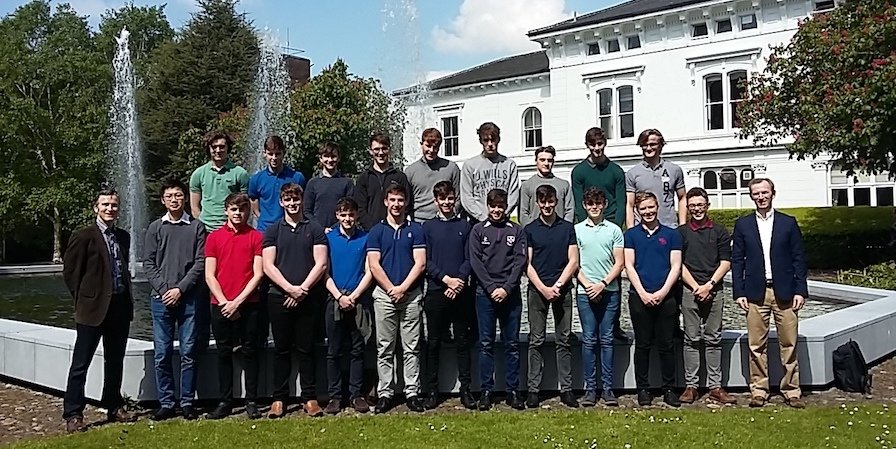 Last Tuesday, 2nd May, Physics students from Poetry travelled to the University of Limerick with Mr Stephen O’Hara to make their final presentations for the Mathematical Modelling project. This project, which is the only one of its kind in the country, is run by James Gleeson, Professor of Industrial and Applied Mathematics at UL and Co-Director of the MACSI Consortium, and our own Stephen O’Hara.

Many hours of preparation had gone into developing our mathematical models, which came together bit by bit as we met each Friday evening under the tutelage of Mr. O’Hara. We received three visits from Professor Gleeson throughout the year: to introduce us to Maths Modelling and present us with the problems; to offer us guidance and advice; and most recently at the end of March to take any final questions and queries and give us an invaluable tutorial in the art of presentation.

On the day, there were four presentations, with three groups presenting their models for maximising efficiency for a lift in multi-storey building, and one group presenting their model for minimising drivers’ cost of refuelling their car. Something that became evident during the project is that there is no correct way to approach a model. Three groups presented a model for the lift problem, with each taking varied approaches and three very different conclusions were reached. This is part of the beauty of working with real-world problems, they are not stated as mathematical problems – they are real world problems – and it is our job to ‘mathematize’ and develop mathematical models describing them.

It was fascinating to see the different approaches each group took to solving their problem. The project calls on students to use many kinds of tools, with the group working on the petrol problem designing and developing an application to help motorists decide when and where to refuel. After each group had made their ten minute presentation, the floor was opened for questions to the professors, which included Professor Steven O’Brien, the other director of the MACSI consortium, lecturers and postgraduate students in attendance, and these questions challenged the groups on their knowledge of their models and information in relevant areas.

Huge thanks to Mr O’Hara for the massive amount of time and effort he has put into the project throughout the year, and to Professor Gleeson for giving up his invaluable time to facilitate the project and host us in UL.

The students involved in the Maths Modelling Project will present their work to their peers, parents and members of staff in Clongowes on the evening of May 18th. Check here for a report on the event.