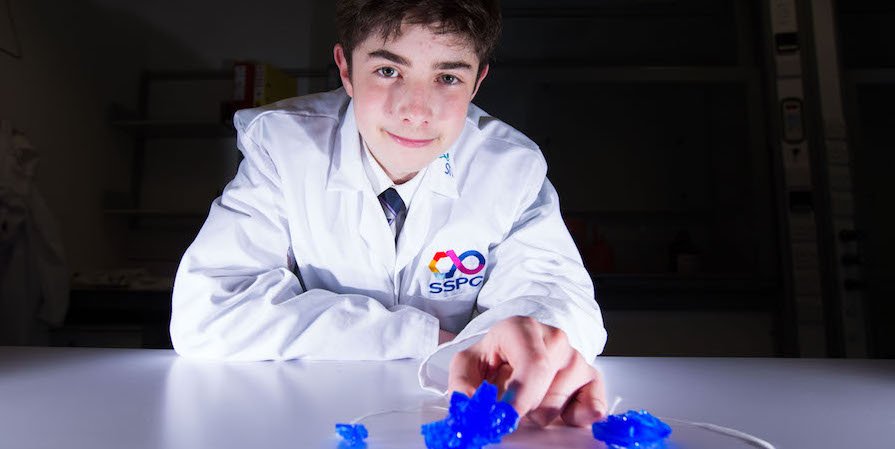 We are delighted to report that Kieran Barrett Gomez (Rudiments) was recently announced as a joint winner of the SSPC-iCRAG National Crystal Growing Competition. Kieran won an iPad mini for his efforts and he and his classmates were invited to a prize-giving event in the SSPC centre, University of Limerick on Monday, April 3rd.

The contest was open to post-primary students and the aim was for an individual second-level student to grow a single crystal using either sodium chloride, alum, sugar, or copper sulfate with the entries being judged by SSPC (Synthesis and Solid State Pharmaceutical Centre) experts on crystallisation and crystallography. The method of presentation involved was bang up to date with the students submitting the results of their projects by tweeting a picture of the crystal they had grown.

Each crystal was awarded marks as set out in the judging criteria:

and the total score was found by applying the logarithm equation [log (M+1)] x Q. This was to ensure that large poor quality crystals didn’t swamp out smaller good quality crystals according to Chemistry teacher, Ms Edith Kearney who recounts the progress of the project:

Back in November, Kieran Barrett Gomez, Julian Diaz Trancho and Frank Tang chose copper sulfate as their material and began the painstaking process of growing the largest most perfect crystal. The whole process took four weeks, beginning with creating seed crystals, followed by selecting the most perfect seed crystal to suspend in a super-saturated solution of copper sulfate. Daily follow-up was required and steps were taken to ensure that a single crystal was produced rather than small multiple crystals.

Each of the boys demonstrated resilience and excellent problem-solving skills as they resolved each of the difficulties encountered during the process. Kieran’s winning crystal reached a mass of 10.1 grams. It was in a rhombus shape with each side being 2.5cm by 2.9cm by 2.3cm by 2.8cm, with smooth well-defined crystal faces and excellent clarity.

Kudos is due to Ms Kearney for driving the project which the Headmaster, Mr Lumb (no mean chemist himself) described as ‘an exciting piece of Chemistry!’