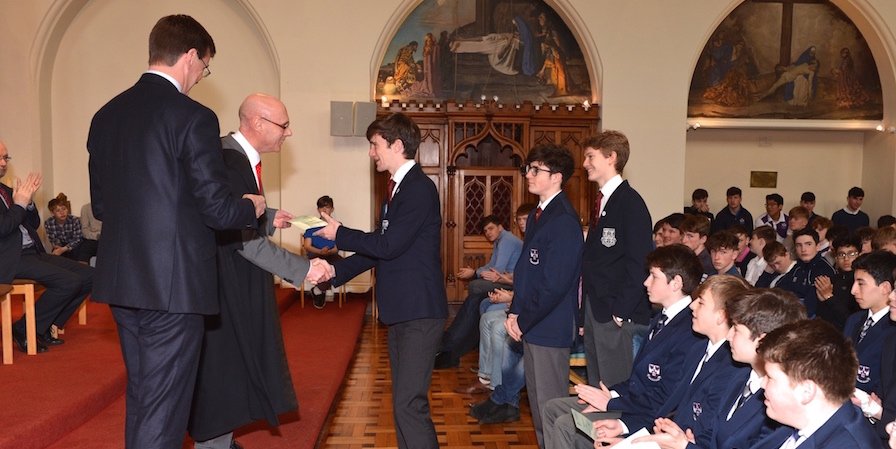 The Boys’ Chapel was packed on Wednesday (March 29th) for the Headmaster’s Assembly just ten days before the start of the Easter Vacation. Mr Lumb commenced by congratulating the students in Grammar and Rhetoric on their results in the Mock Exams as they begin their final preparations for their state exams in June. Noting that the results thus far have been very promising he encouraged both groups to redouble their efforts, stay focused and work hard on the final run in to the Junior and Leaving Certificates. He then made awards to the top three students in each year based on average diligence scores in the February Headmaster’s Reports.

The Headmaster then noted several achievements in the sporting arena ranging from the inaugural Clongowes U14 rugby tournament for the Fr John Sullivan trophy to achievement of the Senior soccer team in reaching the semi-finals in this year’s newly established schools’ competition. He also congratulated the several rugby players who have received representative honours at age grades from Under 17 to Under 20 (see the forthcoming Clongowes Life for more).

Turning his attention to the activities of Transition Year, Mr Lumb spoke about the preparation for the Duck Push in June with two new waterfowl ready to hit the road for Limerick. He pointed out that fundraising had been on-going throughout the year with various mini company projects as well as the Duck Push Golf Classic at the K-Club due to take place in early May. Six Transition Year students were recently involved in the HOPE Foundation immersion trip in Kolkata, India, while a larger group is due to travel on the Ignatian pilgrimage to Northern Spain next month.

The Headmaster saluted the achievements of Higher Line Boys in the national final of the Irish Applied Mathematics Teachers Association quiz and the Third Liners, who entered the National Crystal-Growing competition in the University of Limerick. He also referenced the University of Limerick’s on-going involvement with Clongowes in the area of Maths Modelling with the recent visit of Professor James Gleeson.

In Performing Arts news the Mr Lumb noted the various Clongowes’ successes in the Wesley College Interschool’s Music Festival as well as the Wesley Choral Competition. Coming attractions include the Trad Music group’s outing next Tuesday, the upcoming Festival of Drama and the departure of 60 members of the orchestra for Italy at the start of the Easter vacation. Other forthcoming events include the embarkation of 20 Poetry students for Lesotho on the African Immersion Experience and another party that will travel to Taizé on pilgrimage over Easter.

Mr Lumb wished all a good holiday after another very busy and positive term, which will draw to its close next week, before leading the assembly in the Lord’s Prayer, the prayer of all Christian people.