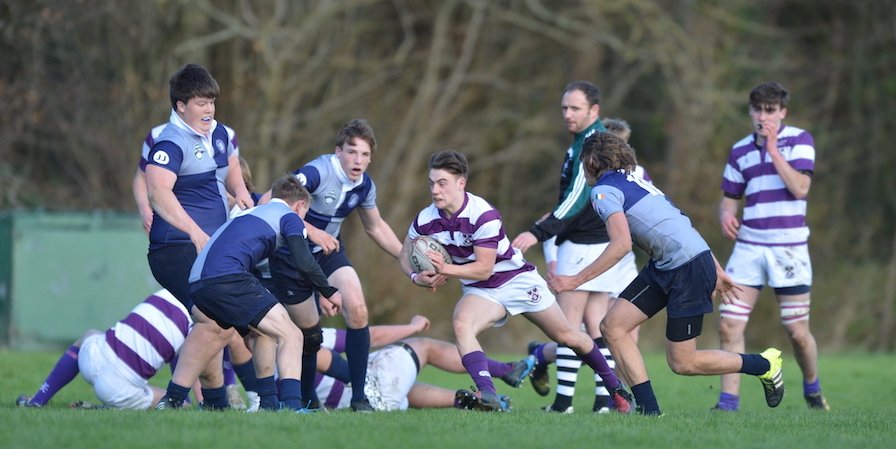 On a chilly Monday afternoon Clongowes hosted fellow Jesuit College, Georgetown Preparatory School from Maryland USA. With the rugby season drawing to a close it was a great opportunity for our boys to have one last game before focussing on our summer term programme. With the short St Patricks Day break behind us and the whole country still on a high following Ireland’s heroics against England in the Six Nations, two squads took to the field against our American opponents.

The Clongowes teams comprised 4th and 5th years with a select few 3rd years, who had performed so well in their Junior Cup campaign. There was a lot of talent on show and both sides started brightly with the boys on Team B (captained by Ben O’Shea) scoring two tries early on. This set the tone for a comfortable win with Adam Mullen, Max Dowling and Milo Cruise O’Brien all putting in fine performances. Our visitors who are – like most American schools – in their early development in rugby terms were highly competitive throughout the game showing that they have come a long way and never giving in against a very fluid Clongowes outfit.

On the adjoining pitch Team A was facing a much more physical side and the early exchanges produced some huge defensive hits. The Clongowes side, which included JCT captain Calum Dowling at 7, began to find its rhythm and finally broke the deadlock when Charlie Gallen took a great line to score, just evading the lunging tackle of former schoolmate Ultan Hourican, now residing stateside. With the game settling down and the team starting to find their feet, further tries arrived following some excellent interplay between forwards and backs. To their credit Georgetown mananaged to force their way over before the half time whistle for a well worked try (24-7).

Following several changes at the interval the pack began to exert its dominance with Bobby Sheehan and John Timmins to the fore. The lead began to stretch with Tim O’Brien, now operating as a winger, crossing for a second half hat-trick. The introduction of David Wilkinson at 10 in place of Jack Reilly gave him his first taste of senior rugby and he was instrumental in keeping us on the front foot. Georgetown scored their second try when their impressive number 7 touched down late on to bring the curtain down on an enjoyable afternoon for all (52-10).

We hosted our visitors to dinner afterwards and exchanged mementos. Following some formal words of gratitude our visitors departed but nor before issuing an invitation to travel to Georgetown some day for a return fixture – an invitation we hope to take up.