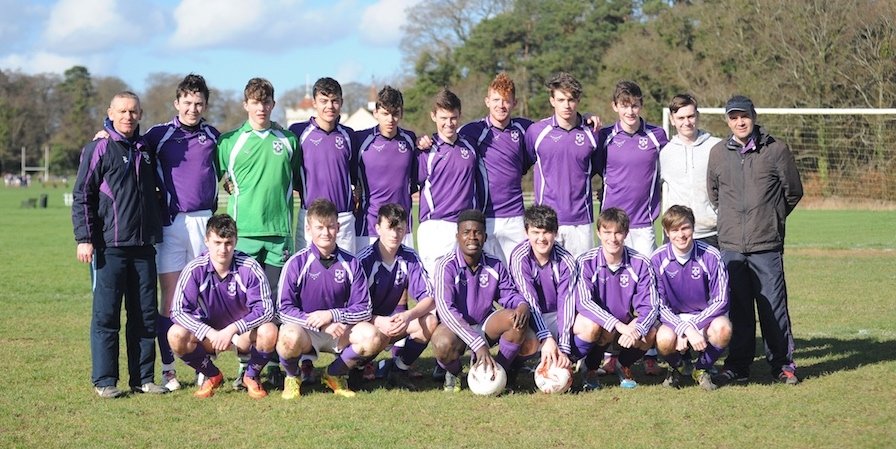 For the third time in a fortnight Belvedere proved to be the better team in the contest between the confraternal sister colleges. In the inaugural Leinster Schools Shield Tournament they edged Clongowes out of the competition in extra time after a 1-1 final score, but it might well have been a very different story. Erstwhile Senior Soccer Coach, current Deputy Headmaster and all round football man, Mr Martin Wallace takes up the tale of thwarted ambition in the beautiful game… (picture taken by the very talented Oscar Martin from Grammar)

Although Belvedere was the dominant team in terms of possession in the first half, Clongowes had far more scoring chances. In fact, Ben Mathuschka, who marshalled his penalty box with nonchalant sang froid, did not have to make a meaningful save in the whole game, much of the credit for which must go to the doughty back four of Conor Galvin, Michael Colivet, Fionn Murphy and Ciaran Woods. It was a bitter irony that Belvedere’s first half goal, their only notable effort of the half, was clearly offside, clear to this observer who was in line with the scorer when the ball was played, unlike the referee, who did not have the same opportunity to judge the situation in the absence of independent linesmen for the game.

Our boys were worth at least parity at half time, but the score stood at 0-1. Conor Mulholland and Michael Medeiros – outstanding throughout the game – had their chances to get on the scoresheet, but the third agent provocateur in this contest was the less than perfect surface, which thwarted both sides in their efforts to play good football. Daniel Keaveney created a great opportunity for himself with an impressive solo effort only to be tackled by the anthropomorphic mud that showed no loyalty to its genius loci. Sadly, Clongowes, playing ‘downhill’ into the ‘damp’ section of the ground in the first half, suffered more from its capricious surfaces (sic!).

Clongowes dominated the second period and was deserving of the equalizer when Michael Medeiros broke through the centre to score a fine individual goal. Some of the credit must go to superb tackling by Ciaran Woods which resulted in repossession of the ball in the first place. His contribution to both defence and attack throughout was a highlight of the game. As the game opened up in the final quarter of normal time, chances fell to both sides and there was a sense that this exhilarating game could be won and lost at the whim of the pitch. Midway through the half, Clongowes were ‘bossing’ the game with Daniel Reilly and Karl Von Finckenstein performing stubbornly in midfield and Colm Murphy on the wing. Given the number of goalmouth incidents on both sides, it is remarkable that it remained 1-1 until full time.

Belvedere came very close on a number of occasions in the first period of extra time, but Clongowes had their moments too. As the second period started, we began to relish the prospect of a penalty shoot-out, especially since both keepers had acquitted themselves so well – Ben with his suave assurance whenever greasy ball and fearsome forwards dared to enter his domain, and the Belvedere goalie who made several fine reflex saves during the course of the first half. However Belvedere, having started the second period of extra time with renewed verve, took the lead with a spectacular volley from the corner of the box and then – while Clongowes tried desperately to claw their way back to parity – they fell victim to a breakaway goal that brought a contest that had pirouetted on the proverbial knife-edge for so long crashing to a disappointing conclusion.

Not unlike Monday’s senior rugby match, the Clongowes boys were courageous and heroic in their efforts, but Belvedere had just enough to deserve victory. Their number seven deserves a special mention; on a pitch that was entirely unsuited to footballing artistry, he managed to produce several masterpieces and proved to be the difference between the sides. Good luck to Belvedere in the final! To our valiant heroes: you wore the jersey with honour and passion. Commiserations to Assistant Coach, Liam McAuley, and to the ‘gaffer’, Noel Mason, who has transformed the profile of soccer in Clongowes over recent years!