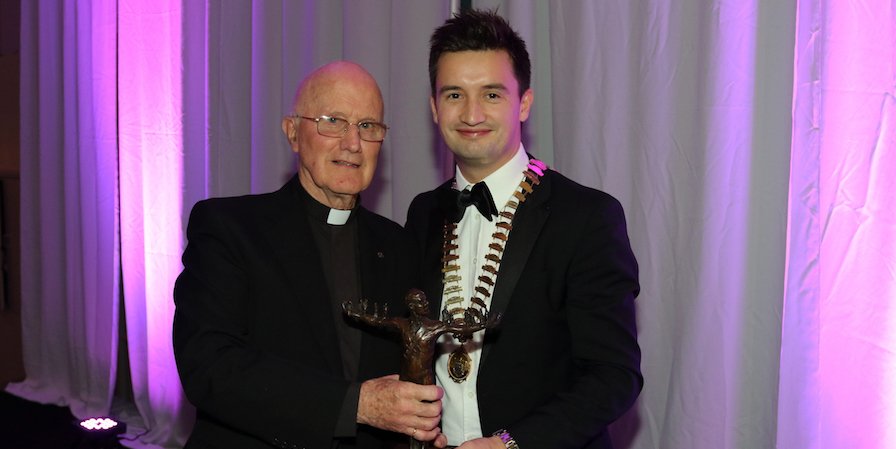 There was surely a straw or two in the wind for the Rector and quintessential Old Clongownian, Fr Michael Sheil, SJ (OC’56), when he found himself excluded from the deliberations of the Evaluation Committee for the Alumnus of the Year 2016 last February. Fr Sheil had already appeared on the front cover of ‘The Clongownian 2016’ in this most historic year, but an even greater accolade awaited him at the Clongowes Union Dinner on February 24th. Ms Michelle Burke of the Clongowes Foundation takes up the story…

In September 2016, nominations were requested from Old Clongownians (OCs), the Jesuit community, Clongowes staff and current parents, for suitable candidates to receive the Clongowes ‘Alumnus of the Year’ award. By early February 2017 the long list included a splendid representation of OCs in the categories of Social Justice, Arts, Public Life, Business and Innovation, Science, Medicine, Sport and Courage and Determination. On February 10th the evaluation committee, comprising two past Union Presidents, three OCs, two current and past Clongowes academic staff and two current parents evaluated nominations and ultimately selected the recipient of the Alumnus of the Year Award, unanimously.

And so it was that – at the Clongowes Union Dinner on February 24th – Andrew Lynch (OC’04), President of the Clongowes Union, had the honour of presenting this award, on behalf of the Clongowes community, to Fr. Michael Sheil SJ. The essential aim of a Jesuit education is the full growth of the person, leading to action. The Ignatian vision is to form ‘Leaders in Service’, men of competence, conscience and compassionate commitment. The aim of the ‘Alumnus of the Year’ award is to acknowledge and celebrate those who have clearly followed that path. There can be no doubt that Fr. Michael Sheil SJ has followed this route – man and boy – having had an influence in the formation of no fewer than three thousand Old Clongownians.

In accepting the award, Michael was quick to deflect the spotlight from himself to his alma mater and in particular ‘the sharing’ to be found therein:

‘I am greatly in your debt for – in our mutual enterprise – I have been so privileged to come to know extraordinary people – young men of courage – of generosity – of faith and perseverance – of vision and optimism. May I hold up as an example someone who epitomised those virtues, who – living life to the full – faced his untimely death just over a year ago with the same great courage and fortitude which he showed when I knew him as a young centre on our 1978 Senior Cup Team? I was privileged to spend some time with him shortly before he died and now – for the inspiration you were to me and to so many others – I renew my thanks to you, Mark Attride (OC’79).

The full text of Fr. Sheil’s remarks are available here, while a tribute to his 60 years in the Society of Jesus and in Clongowes may be viewed here.