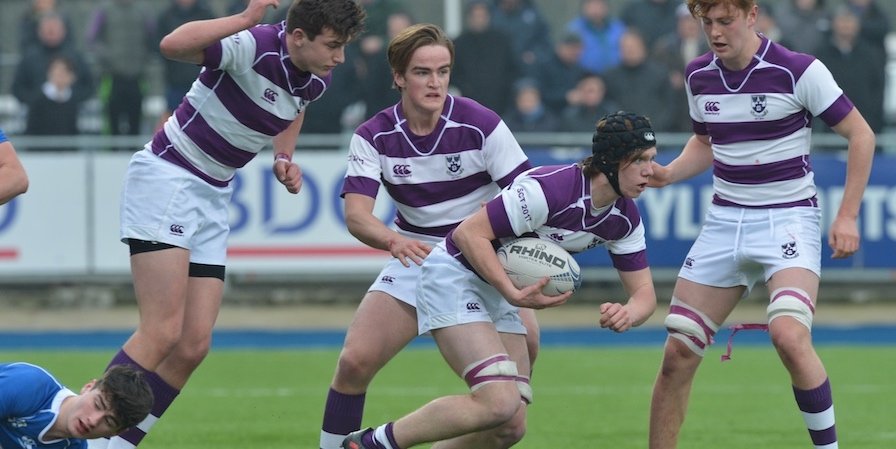 Given the day that was in it each side was glad that St Valentine’s Day failed to provide another massacre as Clongowes moved past St Mary’s into the semi final of the Leinster Schools’ Senior cup at Donnybrook (Februarys 14th). Lovers there were aplenty at the game – lovers of the brand of open running rugby that was served up by both teams resulting in five tries and only one penalty goal.

The game might have well been over at the start of the second half when Matthew Martin touched down to add to the first half offerings of David Jeffares and Ben O’Shea. O’Shea converted all three to leave 21 points between the teams, with Mary’s yet to trouble the scorers and yet, by the 54th minute, the gap was down to just seven after the Rathmines team ran in two (converted) tries with no reply from Clongowes. When the second restart went straight out of play gifting Mary’s a scrum on halfway we began to wonder if all would end happily after all.

We needn’t have worried as the boys in purple and white re-focused to deny their opponents any further scores, but it took a late penalty from O’Shea to finally shake off the pursuit and leave the supporters breathing more easily as the last few minutes ticked by. No last gasp heroics or escapes to victory then, as the Seniors made their way into the semi-final for the fourth year in a row, where they will meet fellow Jesuit students from Belvedere College in three weeks time.

They’ll be hard to beat.

Pictured above are David Jeffares, John Timmins, Sean Phelan (on the ball) and Anthony Ryan.