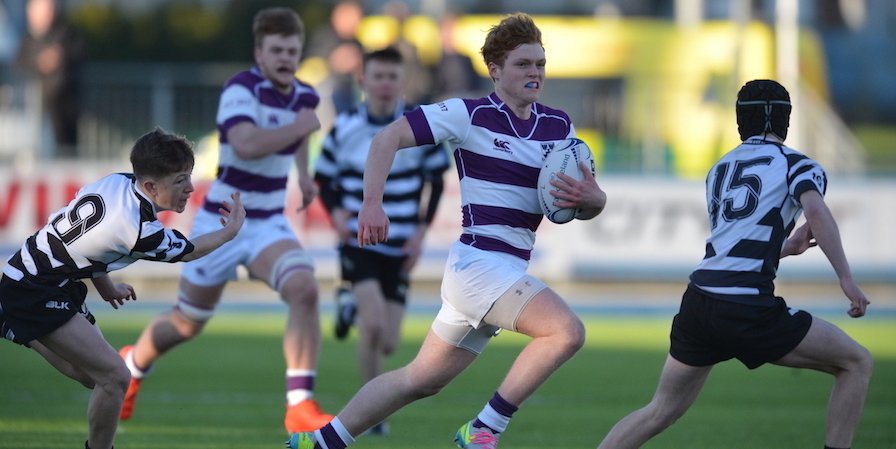 The Clongowes Junior Cup team followed their senior brethren into the quarterfinals of the cup with an impressive victory at Donnybrook yesterday. Rather remarkably all 40 points came in the first half with two tries from Christopher Grimes (pictured above) and one apiece from George Fitzpatrick, Michael Behan, Barry Dooley and Calum Dowling, five of them converted by David Wilkinson. Mr Garry Corcoran was there for Clongowes Digest…

An assured and confident display from the Junior Cup side saw Clongowes despatch an overwhelmed Cistercian College Roscrea on Sunday last in Donnybrook, with a grit, skill and determination that drew natural parallels with the class of ’08 – the last side to add to Clongowes haul of five Junior Cups. It was evident from the off that they were focused on the task at hand as they tore out of the traps in the opening phases of the game with returning outside half from last year’s cup campaign, David Wilkinson, making a clean line break beyond the black and white defensive line. He had the presence of mind to draw and pass to the supporting blindside flanker Jack Hilliard, who showed a clean pair of heels and impressive fend off to put Clongowes 5-0 up inside the opening minutes with a smart finish in the left hand corner.

Although Wilkinson failed in the conversion attempt his influence on proceedings was growing and a solid scrum in the middle of the field allowed him to attack the gain line with real intent. Number eight Barry Dooley was next to test the Roscrea defence and when his powerful carry was combined with an intelligent offload to the on rushing Michael Behan, the Clongowes hooker crossed the whitewash. Wilkinson added the conversion to leave the score at 12-0 with a mere six minutes gone.

Roscrea were unable to contain a steamrolling Clongowes attack which appeared comfortable asking questions of the Roscrea defence in all areas; whether probing around the fringes through a powerful pack or stretching wide in the form of a talented and menacing back line containing two experienced cup campaigners in centres Christopher Martin and Christopher Grimes aided and abetted by the elusive George Fitzpatrick on the wing, who impressed throughout. Clongowes demonstrated a collective calmness and focus, no doubt aided by the return of no less than seven from least year’s panel.

It was the experienced Grimes who added the third for Clongowes as he smashed into the Roscrea defence with a great arcing line from thirty meters out and assuredly finished under the posts allowing Wilkinson an easy two points. Sustained pressure led to three more tries before the half as Dooley, Grimes and captain Calum Dowling, with a particularly impressive effort, all crossed to give Clongowes a comfortable 40-0 lead at half time.

To their credit, Roscrea came out fighting after the interval led by captain and open-side flanker Oisin McCloskey. Both he and number eight Conor Power tested the purple wall, but Dowling led by example inducing a grimace from the crowd on more than one occasion in the second half with aggressive, bone crunching tackles ensuring that Roscrea remained scoreless for the third quarter. Dowling’s leadership was aided by Jack Kearney and Jack Hilliard who both secured valuable turnovers in Clongowes territory keeping Roscrea at bay.

Although the aforementioned all stood out, it was the consistency and accuracy of a well-disciplined defensive system that bore fruit for Head Coach Emmet Condron’s charges. Quick line-speed halted any foray into the Clongowes’ danger zone and they were rarely troubled despite the valiant ‘never say die’ attitude of their opposition. Pinpoint box-kicking from Adam Reynolds at scrum-half meant Clongowes had a valuable exit strategy whenever under the cosh and Harry Radmall’s excellent reading of the game from fullback thwarted any attempt by Roscrea to gain the territorial upper hand from the boot.

The forty-point cushion allowed the coaching team to ring the changes as the bench was emptied – Luke McMahon, Eoghan Cumbers, Gareth Donovan Hugh Hogan, Simon Beggs, Kealan Noone and Sean Sexton all making their cup debuts. Donovan’s introduction on the wing was testament to the strength and depth of this Clongowes panel as he was a regular hindrance on Roscrea’s left flank; quick with ball in hand matched by a willingness to ensure forward momentum in contact. In the dying embers of a fiercely contested final quarter Roscrea mounted one final push but Clongowes stood firm.

Although they will be content with their afternoon’s work, this group will be under no illusion that greater challenges lie waiting as they progress in search of a first Junior Cup in nine years. There can be little doubt as to their credentials as serious contenders after a performance that showed just as much promise with the ball, as without it. An all Jesuit quarterfinal is their reward for an impressive first round victory; they face Belvedere College SJ in Donnybrook on Monday February 27th at 15.00.