A Garda’s Life For Me

Home / News / Academics / A Garda’s Life For Me 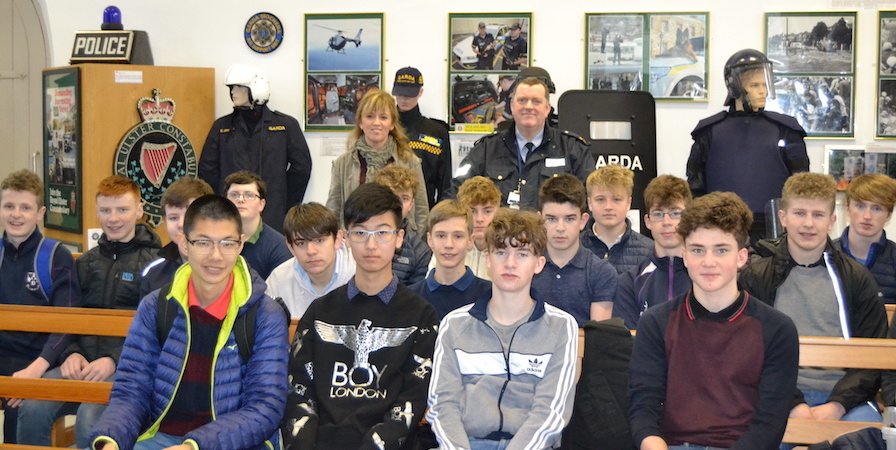 On Thursday, the 19th of January, Ms. Dooley’s 3rd year CSPE class travelled to The Garda College in Templemore in Co. Tipperary for their Action Project on Law. The aim was to understand An Garda Síochána, and its role in the community. Luke McMahon was there for Clongowes Digest…

Upon arrival we were met by Sergeant John Reynolds, who invited us into the Garda Museum for a PowerPoint presentation. After a brief history of An Garda Síochána and policing, Sergeant Reynolds explained the stages of recruitment, and the factors of training for the everyday Garda, the latter of which involves lots of shouting and running, quite similar to a Clongowes rugby training session. After that, Sergeant Reynolds answered several questions we had sent before the trip and then we headed for lunch before moving on to the tour of the facility.

First we were shown the sports hall, where the trainees spend some of their free time, then the dormitories and gym. Having been shown the Hydra Grid Simulation, an exercise testing Garda Trainees in a variety of situations, we were brought to the courtyard to witness a parade demonstration, carried out by Gardaí who were soon to graduate. The facility tour was concluded after a peek at An Garda Síochána’s latest automobiles and a sombre moment as Sergeant Reynolds reminded all about the possible horrors faced on roads.

Finally we visited the Garda Museum, where we were permitted to try on uniforms, sit on Garda motorcycles and try out various other pieces of equipment. After gentle encouragement, we soon gave in to childish instinct and proceeded to make the most of the opportunity. After regaining our composure we said thanks to Sergeant Reynolds for his perseverance throughout the day and began the journey back to Clongowes, enjoying the chance to give themselves rest (more like arrest!) from the long day.